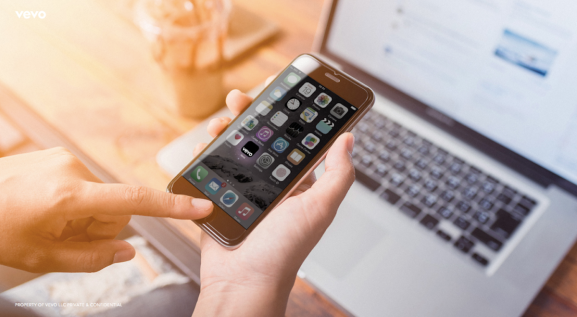 While music video streaming service Vevo may have launched in 2009, this past year or so the company has been acting a lot like a fresh-faced startup.

Starting earlier this year, the company began an ambitious re-boot with the aim of no longer being solely dependent on platforms like YouTube. That meant overhauling its apps and desktop experiences over the course of the year to get more people watching music videos on its own products, and adding new features, like personalization and profiles.

Miguel Alvarado was hired in the midst of this transformation to be the company’s chief data guy. It was a daunting and exciting assignment. Daunting, because Vevo had almost no in-house analytics to speak of, and no data team to build them. Exciting, because he would get to build both the analytics platform and the team from the ground up.

“I saw a lot of opportunity to start from scratch in the world of analytics,” said Alvarado, whose official title is vice president of data and analytics. “You can do that at a startup, but it’s not proven and probably doesn’t have any real customers. Vevo has customers around the world, and we can learn from them.”

The company was founded as a joint venture between major record labels, and Vevo’s initial growth was thanks to its wildly popular YouTube channel. But in 2015, Vevo brought in new CEO Erik Huggers, who wanted the company to focus more on developing its own platforms and apps.

When Alvarado arrived, he was struck by the fact that Vevo was still dependent on third-party analytics solutions. These can make it hard for people across the organization to access the analytics, and to adapt the metrics to perfectly fit their needs.

“What caught my attention is that there wasn’t a homegrown analytics solution,” he said. “I really think that anybody who is very, very serious about data, and using it up to the level we’re using it, I think they need their own platform because you have unlimited flexibility.”

The system Alvarado’s team built serves two main purposes. The first is gathering and dissecting large amounts of information for teams to use in their product development, something that has been essential in the company’s non-stop rollout of new interfaces and services this year. Second, that same system helps drive the personalization and recommendation features Vevo introduced this year.

Given that Vevo’s apps and services appear in so many mobile, TV, and desktop operating systems, knitting together a unified analytics structure was particularly difficult.

Vevo pulled it off by integrating with Amazon Web Services, which includes a range of features (Kinesis, which can process large amounts of data quickly; Redshift, a data warehouse; and Aurora, for storing SQL data checks and results) that allowed the company to quickly get its system up and running in a robust way. 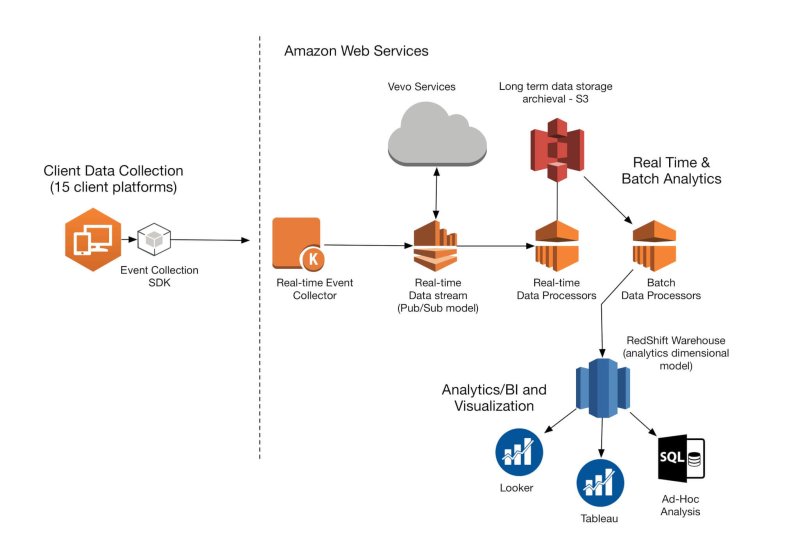 Most important, in the short-term, was that this system allowed every group at Vevo to take advantage of it, either in raw form or through visualizations.

“It becomes truly powerful when all the data is democratized and all the organizations in your company have access to it,” he said.

In pushing down this path, Alvarado also wanted Vevo to start talking about what it was doing with this infrastructure in the public domain. To embrace this new transparency, Vevo released a white paper today that details its analytics architecture and philosophy.

“Vevo’s new user-centric, data-driven approach is already paying dividends,” the paper says. “It’s led to a more efficient and less reactive philosophy that allows us to harness and direct resources where they’ll be most efficient. Gathering more data and combining it in an in-house data warehouse clarifies relationships, reducing the need to lean on uncertain hypotheses to explain new trends or usage patterns.”

Alvarado said many companies he admires, like Netflix, have been very open in talking about their infrastructure. Now that Vevo’s analytics platform is up and running, he wants the company to be in the middle of that conversation. The goal is to contribute what Vevo learns, but also to attract the best talent by developing a reputation for innovation and leadership.

“I think there are a lot more companies that are sharing what they are doing internally with their infrastructure,” he said. “I think some of us in the industry have realized that by sharing, we can all move faster. You don’t have to repeat things, because someone has already found a solution. At the end of the day, it’s your product that’s going to determine whether you succeed.”