Dead by Daylight could be the biggest success that Behaviour Interactive has seen in its 24 year history. The Canadian game studio, which spent much of its existence making games for other game developers and publishers as an outsourcing contractor, made the horror game with publisher Starbreeze, and it became big hit upon its debut in June. That could help it become an original game maker in the future.

The title has shipped well in excess of a million units, and it is growing more popular with each month. And Behaviour and Starbreeze launched an update for Halloween — with addition of killer Michael Myers of the Halloween movies. That led to a record month for engagement in the month of October, said David Osborne, vice president of product at Behaviour Interactive, in an interview with GamesBeat at the company’s Montreal headquarters. I also played a couple of rounds of the multiplayer game, where you play one of four human-played victims trying to escape from one human-played killer. It was both terrifying and fun.

During the Montreal International Game Summit (MIGS 2016) event, I visited Behaviour and caught up with the executive team. That included a joint interview with Osborne and Stephen Mulrooney, chief technology officer and vice president of Behaviour Digital.

They talked about their Hugo research and development division and how it gave birth to Dead by Daylight, which won a couple of trophies at the Canadian game awards. Behaviour has split itself into multiple divisions, including parts that do traditional game outsourcing and others doing original work. 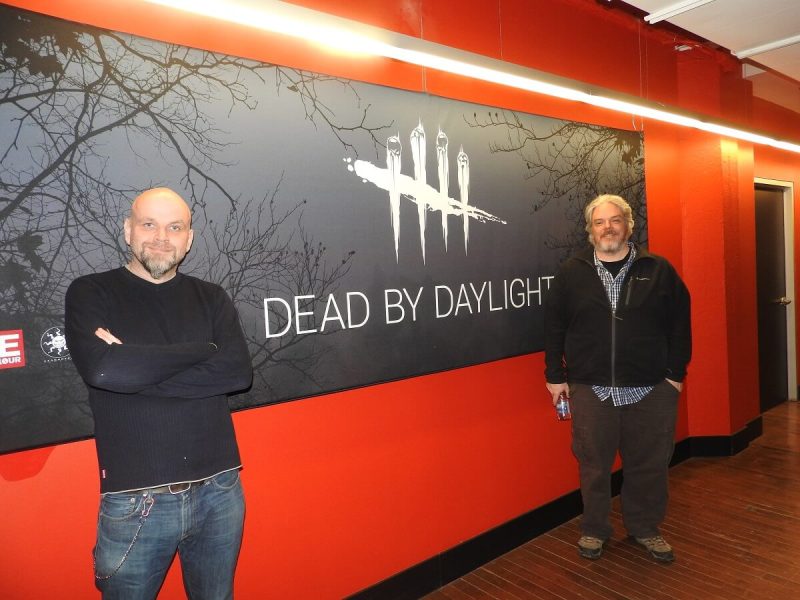 GamesBeat: You’ve had great success with Dead by Daylight. But tell us about Behaviour Interactive’s history first.

David Osborne: This is the stuff we’re prototyping. It’s very rough. There’s no art, as you can see. It’s just a proof of concept. We’re looking at a control method that could be good for VR. It’s one problem we’re looking into.

Behaviour is an umbrella. We’ve been around 23, 24 years in Quebec. Traditionally a work-for-hire studio, but we’ve done some original IP over the years, starting with Jersey Devil back in the ‘90s on the PlayStation. We also did Scaler, and then of course Wet and Naughty Bear. We’ve had a cadence, every few years trying to do something ourselves, but always with a publishing partner.

We decided a couple of years ago to break off into separate studios that were specialized. Behaviour Digital, which is us, we do our own IP. We also license IP, but the idea is we’re co-publishing with partners and making our own product on our own terms. Behaviour Studios is the traditional work-for-hire studio that’s still going very strong. It’s one of the cores of the studio. Behaviour Mobile specializes in mobile publishing. Then Behaviour Business Solutions offers game design thinking for serious applications like training for business. All four studios are in this studio, with the exception — we also have a Chilean studio, which helps out with Behaviour Studios. They’re down in Santiago. That’s our only satellite studio.

Stephen is head of publishing and CTO of the whole company. I used to be head of creative for the whole company, but as we broke out I’m now head of product for Behaviour Digital. My concentration is just on our products now. Stephen’s been in the industry for more than 20 years, starting at Ubisoft. He’s been here now for 16 years. I’ve been in the industry for 25 years, starting over in Scotland at DMA Design working on Lemmings and Grand Theft Auto. I’ve been at Behaviour for 12 years now. We’ve worked together for a very long time. It’s great now that we get to work directly on our own stuff.

The vision for our studio — independence is our ultimate goal, through creative control, good choices in production and business, and player engagement. Obviously without that we go nowhere. Our mission is to make remarkable games that we would play, our way. Not only making them our way, but also playing them our way. We believe in player choice. 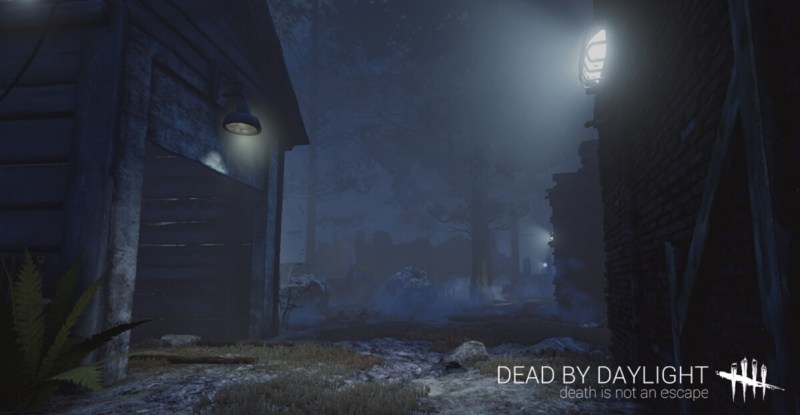 Above: You have to flee a killer in spooky environments in Dead by Daylight.

GamesBeat: And tell us about the research and development you do.

Hugo is the R&D group that I formed a few years ago. It’s a small group of people, people coming in and out. There’s a full-time creative director and technical director. An art director is in there helping out right now. In the past we’ve had full-time QA when it’s made sense, because we’ve had builds we wanted to show and get some feedback. We’ll do a build and then QA would take it and do a focus test internally. Then, at the next step, we’ll start showing it externally.

Hugo is just the name of the group. It’s not a product as such. Historically we’ve had two teams. We have three now. Hugo would run in parallel and feed the current games in production with ideas. The games in production would also feed Hugo with big expensive things they’d already done that we could capitalize on and reuse. It’s very much all three of them working in tandem.

The market for Hugo is the one we’re setting out to build for studio as a whole. It begins with these two games, Warhammer and Dead by Daylight. Dead by Daylight, we’ve partnered with Starbreeze, because they have the Payday community. For Eternal Crusade obviously it’s a Warhammer game, so we partnered with Games Workshop on the licensing to bring in that market. To build our own market for our studio that we want to grow, we’re doing online multiplayer, mature, PC and console.

We identified survival as something we wanted to look at early on with regards to the kind of games we like. We saw it as underserved, but very popular. We’re exploring it with a lot of our Hugo projects. A Hugo prototype is remarkable. If it’s been done before, the thinking goes, why do it again? The search for the purple cow, that reason to be — in this day and age, with everybody able to self-publish, if we can’t stand out there’s no point. So we start with that, what’s remarkable. 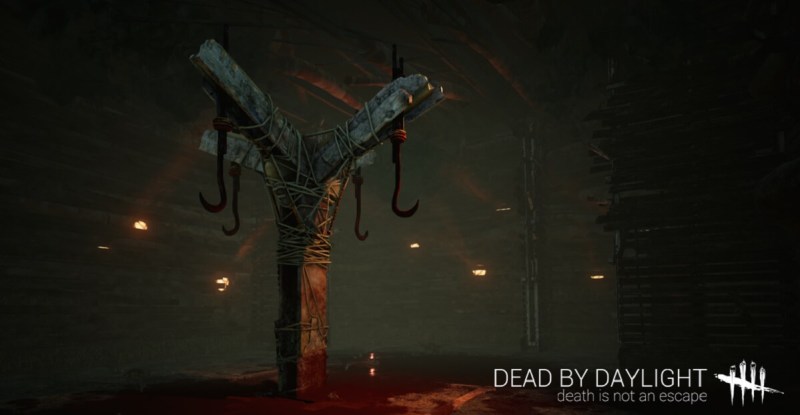 Above: Don’t get caught on a meat hook in Dead by Daylight.

GamesBeat: How do you know when you have something?

Osborne: It has to be fun. That’s the entire point of this, that it’s fun. If that’s going somewhere, it takes the next step to QA. Then it goes to internal focus tests, then external focus tests, then we start talking to potential partners and getting feedback from people we know and trust. It has to prove a compulsion loop. There has to be a reason to keep coming back. What they’re not is tutorials. There’s no onboarding. There’s no polish, no art. The audio is functional. It’s not necessarily stable. It’s not reusable code. It’s very fast, rapid prototyping.

Dead by Daylight was the first that used this process. Hugo was born from the success of this exercise. Dead by Daylight itself—as a company we’ve been working and experimenting. You can look at some of the drawings here. We’ve always been interested in being the bad guy. It’s an underserved thing. I remember even early times on GTA where it was like, “You can’t do that!” There were no games about letting you be bad. Obviously GTA goes to great lengths to prove that you’re not really bad. But there was something interesting there.

We did a number of prototypes that led to things like Naughty Bear, where you have to exact your revenge on these things. We tried lots of AI and things like that. But what we found is that real people making stupid decisions is a lot more entertaining than a machine trying to do that. It’s real, right? That very emotion of watching our game, which is a very important part for us in the process—people even liked watching it. A lot of people say, “I don’t want to play,” but you could see that they were gripped. They had emotions about it. It was like watching a movie.

We knew that streaming was getting bigger. We knew that influencers and bloggers were starting to have a massive effect on the industry. People watching games was becoming a credible thing. You get a lot of the same emotions. If you see somebody being bad at a game, it makes you feel smart. If you see somebody being great at it, you feel like you’re learning something. But of course now it’s spread to people who aren’t even gamers themselves.

GamesBeat: How did you manage Dead by Daylight?

Osborne: So we were thinking about this for years. Let’s find the fun, ask others, and then greenlight it. That was the process. We started with a Hugo prototype. It was two staff, two creative directors, and myself experimenting with what this game could be. Because it was a rough prototype — it wasn’t even networked — we simulated the multiplayer experience by doing split screen. We had a piece of cardboard cellotaped down the middle of the television. We’d bring people in to do tests. It was a simulated experience. Instead of having four playable survivors, we just gave you four lives to try to simulate it.

Early on we found out that the monster being first-person, them being third, was a really good way to go. I can show you a video of that, the very first prototype. No sound or anything. You see here the survivor. All these meshes are just pulled off the web. The whole thing was programmed by one guy. We can see the killer with his killer’s eyes. He’s got the red light. He’s first-person. They’re third. Climbing through windows and things like that. He’s looking for them. There he goes.

People seeing that, even that, would say, “Augh!” Even with funny art and no real sound effects, we could tell something was there. It was organically fun. Matches were very fast, between six and eight minutes. Every time you played it, it was different. Because there was no AI, there was a feeling that the moments were real. We’re going for great moments, because that’s what Twitches well, but it’s also just what you remember about a game. You remember the high points and you remember the ending.

We’d set this up in a dark room and get people to come in and play and watch. Our greenlight process was just that, watching everybody reacting to both playing and spectating. We’d massage the prototype, add features or take them away. The levels were generated every single time, because we didn’t want anyone to feel comfortable in mastering the maps. We wanted people to feel lost. If one of you wasn’t lost, it would be unfair. The killer doesn’t know the map. The survivors don’t either. You roughly know the map, because of a few landmarks, but other things change every time you play.

That’s very important to us at our studio. Smart choices affect content. Smart content and content creation is a big pillar for us. We’ve made a number of titles where every time you play, it’s different. The next stuff we work on, we take that further.