GamesBeat: What’s it like working on a story for so many years? Are you still on a blueprint from back when the game started, or do you take things an expansion at a time?

Boyd: It really varies. Knights of the Eternal Throne is playing off ideas we came up with for Knights of the Fallen Empire, which were conceived quite a while before Knights of the Fallen Empire actually came out. The ideas in that spun out from ideas about who the Emperor is and what his goals are, which came from well before launch. So different aspects can be older or younger depending on where they fit. Primary villains like Valkorion have been around in things that are many years old, or characters like Theron, we ended up playing that out.

We fleshed out the story more and realized there were new elements we wanted to emphasize, beats we wanted to hit, relationships and choices that we wanted players to encounter. So it really varies from place to place. You want to have the right balance. You want the story to feel like it’s going somewhere, that it has a very thoughtful and meaningful end goal in mind, but you also want to be flexible. You want to be able to add new ideas and content. We certainly have the ability to do things in the game now that we never would have had back when we were planning out the original story before launch. Things like being able to control a walker and go into combat, or disguise yourself as an enemy for a whole chapter. Those are things we couldn’t do, or could only very briefly do in a very hacked-up way.

Now we can create a whole story based on things like that. This year we did the bonus chapter featuring HK-55, where you play as a completely different character. That’s something we never could have planned for back in the day, but it really gives us an opportunity to tell a fun and exciting story that’s different in a way that’s rewarding. I think our fans really enjoyed that as well. 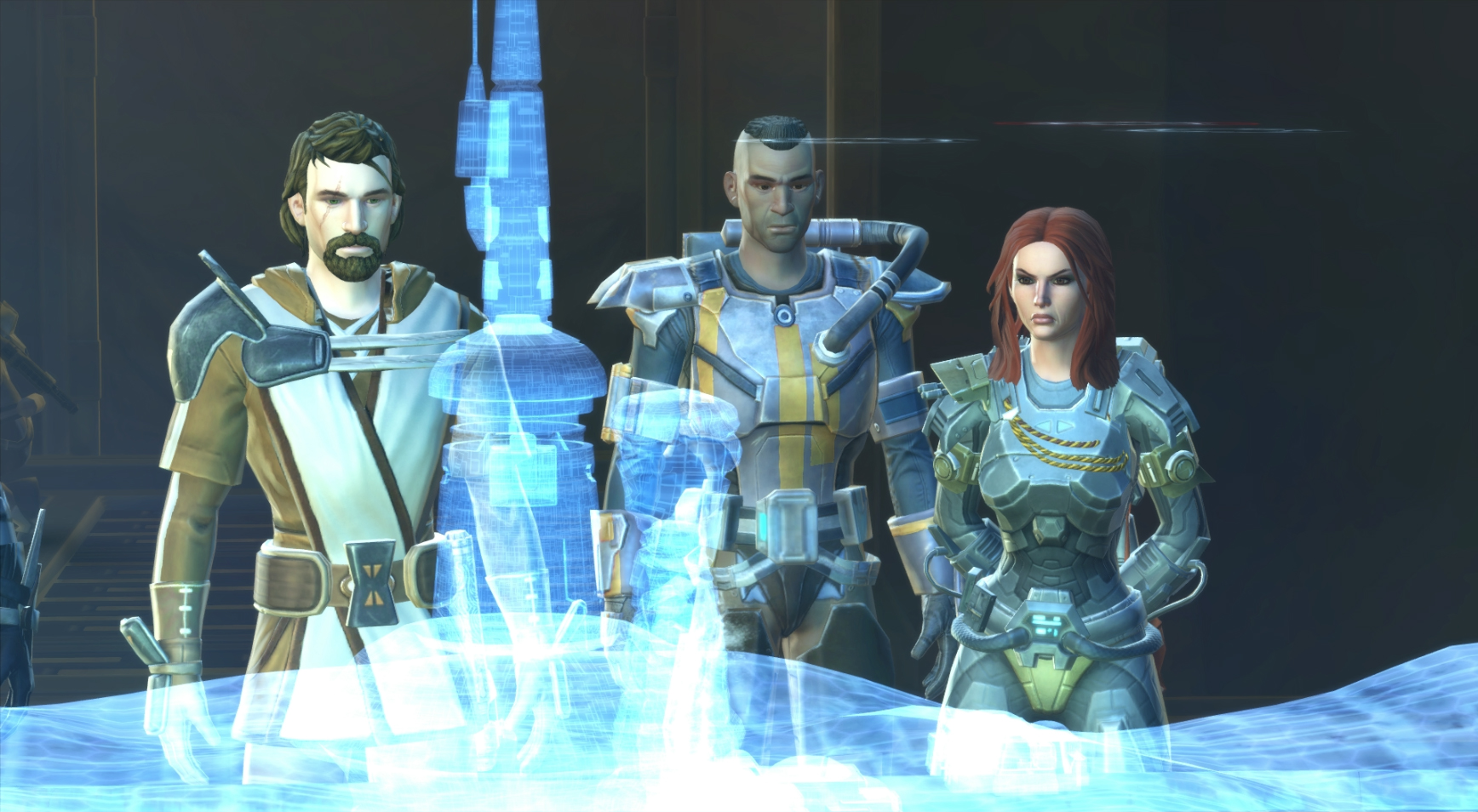 Above: It ain’t Star Wars unless someone’s planning an attack around a holographic map.

GamesBeat: Each player is set up to feel like they’re the main character of the story. You have this conflict where thousands of people like that are questing together. How do you balance that from a story perspective?

Boyd: That’s why we try to focus on having the solo story option. That’s how we can make the player feel like they’re the hero of their own story, by creating that experience in each chapter where you’re the star of the show. You’re the focus. You can bring your friends along if you want to play it that way, but it’s your chapter, your instance, your story, you’re the hero. We try to create that kind of vibe by — I don’t want to say we isolate you, but we make sure the experience of the story is entirely based on you and your choices when you’re participating in it. Then, when you’re doing multiplayer stuff, we find ways to nod toward the lead player specifically, but you can all play together and see it through your own lens based on the choices you made back in the main storyline.

GamesBeat: This far into The Old Republic, with each expansion, is it more about giving new content to your existing players, or trying to bring new players in?

Boyd: Oh, it’s both. We have a great audience of extremely loyal folks who’ve been here the entire five years since we launched. We’re always going to be looking for ways to reward them and pay off their investment in the story. They have characters who’ve done so much, faced so many different decisions, and interacted with so many other characters. We want to pay that off. It’s kind like your question about including Knights of the Old Republic material. We want to make sure we’re paying that off, giving people meaningful references to the past.

But at the same time, we’re always working to bring in new fans, new players. Star Wars right now is drawing a huge audience of new people who either haven’t experienced, or maybe they saw it when they were kids. There’s a whole new generation growing up and getting into Star Wars now, so that’s a great opportunity. We can show them that there’s a whole new part of the galaxy that they haven’t experienced before. They can have their own Star Wars saga where they’re making the choices. They’re in the driver’s seat doing cool stuff.

GamesBeat: It’s been almost five years now. At one point, people were writing off The Old Republic, but now you’re about to release another expansion. You still have a good following. Was there ever a point internally where you weren’t sure whether this would keep going?

Boyd: I’ve been on this for a little less than 10 years now. So no, there was never a moment where we didn’t think we would keep going. We’ve always been full steam ahead, creating the next story, the next experience for the players. There was never any doubt, in my mind at least, and I think the team — we were always going to keep moving forward, keep trying to improve, keep trying to respond to players’ feedback, what they’re looking for. We’re always looking for ways to do cool new things in the gameplay that we haven’t done before.

GamesBeat: Expansions have been on about a yearly schedule for the last few years. Is that the plan going forward?

Boyd: We haven’t announced our next expansion quite yet. [laughs] But generally, yeah, we’re always going to be looking to fill a year with regular updates. Some of them will be bigger and some will be smaller. It just depends on where the schedule shakes out.

GamesBeat: Is there an end in sight? Is there a point where you would say that you’ve accomplished what you want to accomplish and move on? Or do you plan to keep going as long as this is viable?

Boyd: As long as they’ll have us, we’ll keep making this. It’s such a cool game. We’ve gotten to do so many exciting things with the Star Wars license. We get the chance to tell Star Wars stories all day for a living. We’re fortunate to be able to do that, and we’re not planning to get out of it any time soon. As long as the game’s doing well and folks are into it, we’ll keep going.