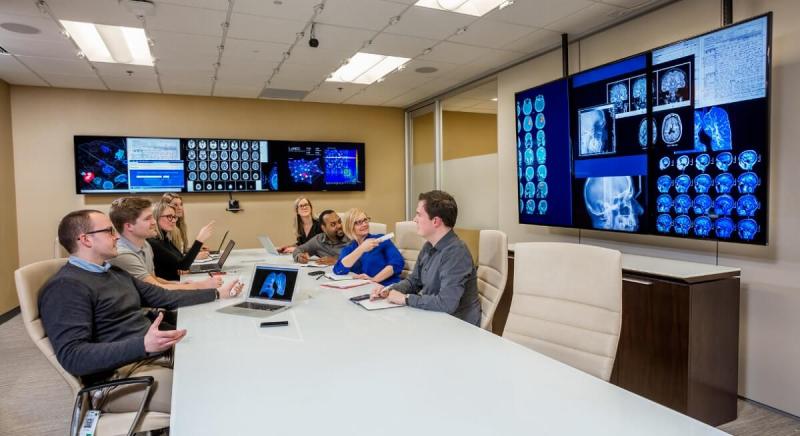 Above: Mezzanine is being used by researchers to help cure cancer.

VB: There was one attempt by the people who made Journey, a very popular game. It was only about four hours long, but they had a multiplayer mode, where you could go on your adventure with somebody else. That other person was a complete stranger. You couldn’t talk to each other. But there’s a lot of puzzle-solving in the game, and you could work together on that and progress. It’s a very different kind of cooperation than you’d expect.

Underkoffler: I have a great friend who was a large-scale team lead on Planetside. I used to study them playing, because they’re all separated by distance, but wearing headsets, so there’s communication through one channel that allows them to operate as a conjoined unit. That was interesting.

VB: There’s almost always cooperative modes in games these days, where you’re shooting things together or whatever. But collaboration—it makes me think of some of those alternate-reality games, like the I Love Bees campaign for Halo 2. I don’t know if you ever read about that. They had hidden clues scattered around the web and the real world to market the game. They made 50,000 pay phones ring at the same time, and people had to go to as many of these could and answer them. They recorded what they heard, and it all patched together into this six-hour broadcast of the invasion of Earth, like War of the Worlds.

Underkoffler: The crossover with the real world is really fun there. 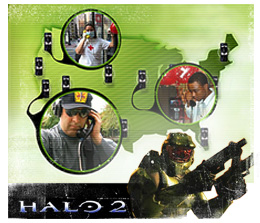 Above: Ilovebees was an ARG for Halo 2.

VB: Alternate reality games became a popular thing later on, although not on as large a scale. They’re very hard to do. Only a couple of companies were doing them. A guy named Jordan Weisman ran one of them. And Elan Lee, but he’s off making board games now. Getting the masses to collaborate, crowdsourcing, is pretty interesting.

I wonder what you get when you put these people together. You take the AI experts and the science advisors and the video game storytellers and moviemakers all together. Something good has to happen.

Underkoffler: I think so. It’s always worth studying, studying games in particular. Before Oblong got started, some of the best work in next-generation UI was happening in the gaming world. People didn’t want to pay attention. SIGGRAPH or the ACM people didn’t want to hear about games, because you need this academic thing and all the rest of it. But the fact is, before anyone else was thinking about it, game designers were figuring out how to do incredibly complex things with a simple controller. A reward system was in place to make it worth learning how to pilot a craft around with six degrees of freedom using a game pad. It bears studying. As you say, once you start colliding these different disciplines, interesting stuff is going to come out. 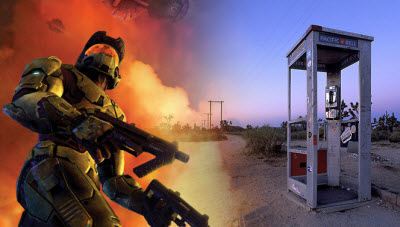 Above: In ilovebees, 42 Entertainment made 50K pay phones ring at once. Players recorded the calls and put together an hours-long broadcast on the Covenant invasion.

VB: VR seems like an interesting frontier right now. People are inventing new ways to control your hands in it and so on.

Underkoffler: It’s pretty primitive. A lot of the foundational technology isn’t even there yet. How do you really want to move around that world? Mostly people have been building the output piece, the headsets. There’s been less work on the UI. But that’s what we’re interested in.

VB: Games are teleporting you from place to place because you get sick if you try to walk there. What would you say is the road map going forward, then? What’s going to happen?

Underkoffler: We’re going to make the kind of computing you’re looking at now – architectural, spatial, collaborative computing – more and more the norm. It’ll be a layer on top of the computing that you expect and understand today on your laptops and tablets and smartphones. As you suggested earlier in the hour, that’ll start permeating through various layers – small and medium business, all kinds of organizations at different levels.

And at the end we get to actual ubiquity. When you sit down in front of your laptop, it’s not just you and your laptop. It’s also the opportunity to communicate and collaborate with anyone else in the universe. We’re going to give the world a multitude of collaboration machines.