Cable television’s biggest Counter-Strike tournament is reaching its zenith this weekend, and the action kicks off on Wednesday.

Eleague’s Counter-Strike: Global Offensive season-two playoffs begin at 2 p.m. Eastern on November 30, and you can watch them live on Twitch or TBS. Professional squads Dignitas, SK Gaming, Astralis, NiP, Mouseports, Optic, Virtus.Pro, and Faze Clan make up the top eight, and they will battle each other for a share of the $1.4 million prize pool starting with a round-of-three quarterfinals battle. This is the latest tournament to feature publisher Valve’s beloved military shooter in the fast-growing $493 million esports industry, and it is the culmination of the ongoing esports strategy from broadcasting company Turner Sports and sports-management firm WME|IMG.

The quarterfinals will continue through Thursday with the semifinals taking place on Friday before leading into the Eleague Grand Finals on Saturday. TBS will broadcast the finals and semifinals live. 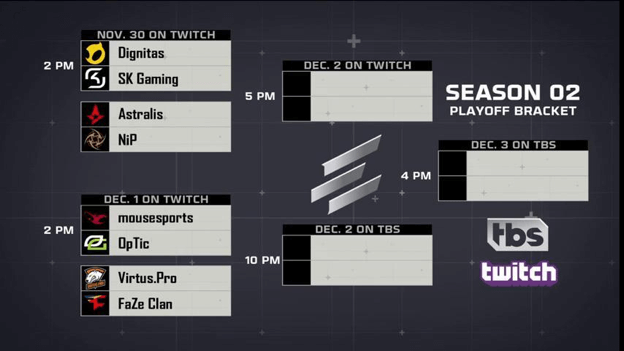 Above: The brackets for the Eleague playoffs.

Eleague kicked off the second season of its Counter-Strike division in September after its first season attracted 19 million viewers. Turner, the parent company that owns TBS, is investing in esports in an effort to appeal to men ages 18 to 34, which is a key demographic for marketers and sponsors. In August, Turner noted that 3.4 million Eleague viewers were new to TBS and were in that young-male demo.

Now, as Eleague continues its Counter-Strike esports plans, it is also planning to bring in other games. The organization is running a 32-squad tournament for Blizzard’s class-based team shooter Overwatch called the Overwatch Open. These matches currently stream only to the Overwatch Open Twitch channel, but it’s a sign that Turner and WME|IMG plan to expand their presence in esports.