Waze, the popular navigation app owned by Google, just gained a triumvirate of new celebrity voices, as former Top Gear presenters Jeremy Clarkson, James May, and Richard Hammond are now available as voice-navigation options in the Waze app on Android and iOS. 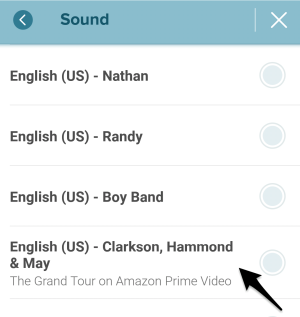 Above: The Grand Tour: Waze

The move is to promote the trio’s new show, The Grand Tour, which is among Amazon’s biggest ever original content investments at around $250 million. The internet giant has been going all-out to promote the show and encourage the public to sign up to an Amazon Prime account, the only way you can currently watch the series.

Founded out of Israel in 2007, Waze built a solid reputation for its community and suite of mobile apps that let anyone share real-time data on traffic and road conditions. It was the popularity of the apps, and the data they generated, that led to its $1 billion acquisition by Google back in 2013.

Waze is no stranger to such tie-ups, having first introduced celebrity voices to the fray in November 2013. Previous big-name stars to land on Waze include Arnold Schwarzenegger and Kevin Hart, while Morgan Freeman jumped on board earlier this year to promote his recent movie London Has Fallen.

To activate the new voices within Waze, head to your the settings area within the app, and therein you’ll find “English (US) – Clarkson, Hammond & May,” which will be available until the promotion expires on February 5.