We believe over the next 12 months, billions of mobile messenger users will become prolific consumers of games and apps using HTML5 and messenger bots. This has the potential to be the most important and lucrative platform ever made available to developers and marketers — it is orders of magnitude bigger in reach from the very start than the original Facebook canvas platform or even the Apple and Google mobile app stores.

HTML5 and open standard web-based technologies enable the possibilities of having fully decentralized distribution of rich mobile experiences across any mobile device within any messenger or native applications. This is exciting, as it offers developers the capability to deploy real-time multiplayer experiences of any genre — like strategy or a space shooter — instantly. This bypasses a half dozen or more steps, such as having one or more friends (in a group chat environment) install an application or find each other inside of a game lobby.

HTML5: Wasn’t it dead on arrival?

In 2004, members of Apple, Mozilla and Opera met to develop the next open standard and the result was HTML5. In 2008, Ian Hickson published the first version of HTML5, and Firefox was the first browser to adopt the technology. In 2010, YouTube launched a beta version of its player in HTML5 and many others followed suit including Twitter, Pandora, Flickr, and LinkedIn. The future looked promising.

But companies quickly realized that developing engaging applications in HTML5 is hard. Long development times with an output that was less responsive and lower quality than native made it challenging. Most famously, Mark Zuckerberg admitted that investing in HTML5 was Facebook’s biggest mistake, and it shifted their focus to easier to develop native apps. Despite being four years removed from the initial HTML5 publication, the dream of easy-to-make, cross-platform applications was not becoming a reality.

While HTML5 has its challenges, it also has benefits. It enables an entirely new way for experiences to be delivered and discovered on mobile platforms because it provides for:

After five years of HTML5 investment at Big Viking Games, we are using our tools to build games at nearly the same speeds as native apps and the results look and feel nearly indistinguishable. Our engine has a focus on compression and short load times which is crucial for success in mobile instant games. 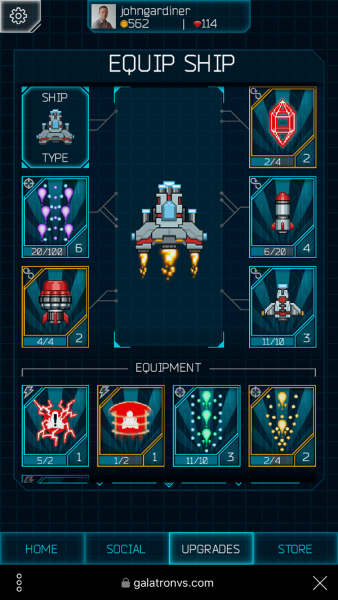 Above: You can equip different weapons in Galatron.

Admittedly, there were many times where it was a difficult decision for us and others to continue investing in mobile HTML5 technology because it took so much longer to produce similar experiences compared to creating something inside of native code and/or tools such as Unity and Unreal. But our faith in HTML5 is about to be rewarded.

Mobile messengers made for HTML5

Distribution is one of the biggest challenges for any open mobile instant game. The open mobile web sounds great but without a centralized app store, it is difficult for users to discover these games and keep them coming back. Messenger applications have solved this problem.

Messengers are now used more on mobile phones than any other application – including social networks – and have an impressive global monthly reach of nearly four billion people.

Messengers are also becoming full-fledged mobile platforms. In Asia, you can do your banking, order takeout, hail a taxi and more within WeChat, Kakao, and Line. In North America, the same shift has begun with Facebook Messenger and Kik both launching bots on their platforms this year. The bots allow brands to interact directly with their consumers and are the first step for North American messengers to be much more than just messaging.

Messenger applications with bots not only create a new distribution network that is inherently viral, but it also acts as a notification system which is currently missing from games played on the open web. For example, our Galatron title has a bot on both Kik and Facebook Messenger which gives the player backstory, tells them when a friend has beat their score or when a new reward is available. This kind of real-time information makes gamers want to play more.

HTML5: The ‘post-app world’ is here

Salesforce.com became famous for its “no software” mantra. The same applies to the mobile games and apps world. We are now moving to the “post-app world” where we no longer need to be fully dependent on apps to deliver rich native like experiences.

HTML5 means mobile experiences can now be delivered instantaneously and embedded in any future application, independent of any specific platform, application or operation system changes. This is the disruptive and power benefit of this open standard. HTML5 truly delivers on the holy grail of “write once, deploy everywhere” and even better yet, instantly.

May the “post-app world” revolution begin.

Albert Lai is the CEO of Big Viking Games, a next-generation game publishing company pioneering HTML5 Messenger Instant Games based out of London and Toronto, Ontario.