Casual mobile games, including the popular Pokémon Go from Niantic, Inc., enjoy the highest benefits from word-of-mouth virality, according to Peanut Labs’ new survey of mobile gamers. But while many people know Nintendo’s Mario character as a brand, a lot of people don’t know that the Super Mario Run mobile game is debuting soon.

Peanut Labs, a subsidiary of Research Now, found those results after it conducted the survey of more than 1,100 gamers to better understand mobile consumer needs, discovery, engagement, and monetization strategies. It sheds new light on some of the top games in the $36 billion mobile gaming market.

This study unveils key performance indicators for some of the biggest mobile games in the hopes of enlightening other mobile game developers, publishers, and marketers.

Some of the consumer findings include:

Above: Peanut Labs has studied the habits of mobile gamers.

The survey found that multiple ways exist to engage and retain players. The mid-core game (which appeal to hardcore gamers but have short play sessions) Clash of Clans from Supercell uses push notifications aggressively. But another mid-core hit, Madden NFL Football, balances gameplay experience and push notifications to earn top honors and the highest user recommendation.

A survey of the Research Now/Peanut Labs panel took place between October 12 and October 17, 2016. 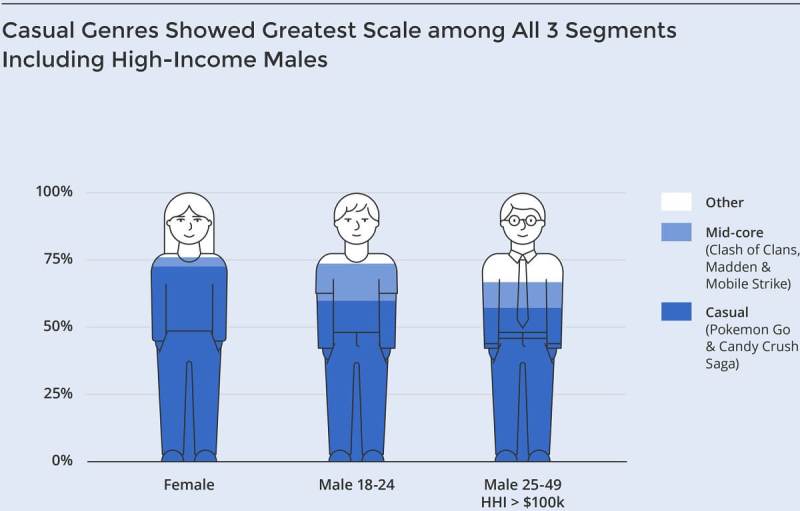 Above: Just about everybody plays casual games.