Facebook wants to completely remove the barrier between you and games on its platform, and it is using HTML5 to accomplish that across mobile and the web.

Instant Games are a new feature from Facebook that enable you to immediately start playing a game on Facebook’s service without having to install a game or an app. The games may show up in your News Feed when you’re on a desktop computer or even when you’re browsing on Android or iOS — but no matter what, you can click on the game to boot it up for on-demand action.

Using HTML5, which is a powerful but lightweight language for the internet, Facebook can make it so the games exist inside of its service instead of on your phone, for example. The benefit of this is that you can start a game with a friend on the company’s Messenger app, and your friend is potentially more likely to respond because they don’t have to install anything. 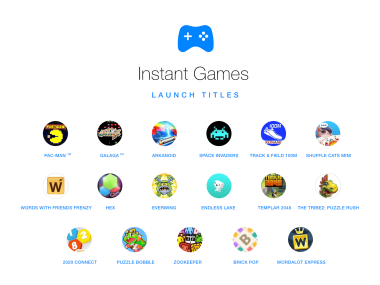 To access the games on Messenger, all you have to do is hit the controller icon in the app. Also, by integrating games directly into its popular chat app, Facebook is giving developers a chance to make their games more discoverable outside of the iOS App Store or the Android Google Play market. In turn, this also gives Facebook access to any potential revenue generated by the releases on its Instant Games platform. For now, the company doesn’t plan to feature any microtransactions or other means of making money from Instant Games, but that is something that will come in the future.

“We are always looking for ways to reduce player friction, and Instant Games on Facebook News Feed and Messenger is a wonderful solution that allows players to jump right in and immediately start playing,” MAG Interactive vice president of product Johan Persson said in a statement. “We know our players well, and we know that they will love this new easy, streamlined approach to gaming on Facebook and Messenger too.”