Minecraft is one of the most popular games of all time largely because it offered players an easy way to build their own Lego-like creations. Now, after a couple of years in Early Access, a Lego game that plays like Minecraft is about to launch.

Publisher Warner Bros. Interactive Entertainment, The Lego Group, and developer TT Games have announced a plan to launch Lego Worlds for PlayStation 4, Xbox One, and PC on February 21. This game enables players to explore and create with their friends in an open world that has clearly learned from Minecraft’s success. TT Games, which is the studio responsible for all Lego video games, originally launched the game into the Early Access program on the Steam PC-gaming service back in June 2015. As part of Early Access, fans can try out the game while its still in development, and they can give feedback to the development team. After more than a year and a half in that unfinished state, the game is apparently ready for a wider audience across PC and consoles.

Lego Worlds gives players a chance to go on an adventure in an environment comprised entirely of Lego blocks. It also gives you a chance to customize your character, ride around in vehicles, and build gigantic creations. 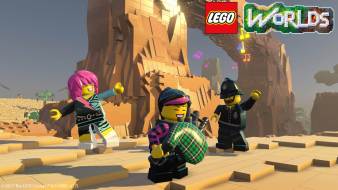 Above: Playing Lego Worlds online together.

Unlike Minecraft, Lego Worlds doesn’t force players to lay down bricks one at a time from a first-person view. Instead, the game gives you a suite of tools that work more like Microsoft’s Paint program. This enables players to express themselves through Lego quickly and with little effort.

“Lego Worlds expands our Lego video game franchise with a new experience that embodies all the fun of physical Lego brick building,” WBIe president David Haddad said in a statement. “TT Games has created an expansive, digital universe that combines unlimited creativity with the Lego humor that fans love.”

Since the game is launching into a retail-ready state, players can expect to find a lot of content to engage with. Lego Worlds still has the cooperative multiplayer mode where friends can work together, but it also has a competitive experience as well. For those playing on their own, they will find a main quest to become a Master Builder that leads him on an adventure involving swords, kings, and zombie invasions.

Now, we’ll have to see if that Lego brand power can help Worlds thrive in a universe ruled by Minecraft.