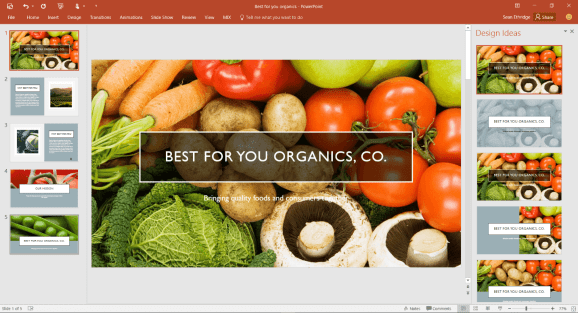 The modern-day PowerPoint with its Designer feature.

Microsoft today said that it has enhanced certain versions of its PowerPoint presentation-building program with real-time collaborative editing.

This feature came to Word on desktop last year. And before that it was available through Office Online. Microsoft said last year that real-time coauthoring would come to all of its desktop apps, and now Microsoft is executing on that commitment.

Above: Real-time collaboration in PowerPoint.

Just like in Google Docs, Sheets, and Slides, this feature lets you “see what others are typing as it happens on a given slide,” Microsoft Office corporate vice president Kirk Koenigsbauer wrote in a blog post.

The feature is live now in PowerPoint on Windows for people who subscribe to Office 365 and belong to the Office Insider program. In addition, it’s now available to everyone in PowerPoint Mobile on Windows tablets, Koenigsbauer wrote.

Also today, Microsoft said it has started showing notifications for certain kinds of activity in Word, Excel, and PowerPoint on Android and Windows Mobile for people in the Office Insider program. The feature will be coming to iOS in the next few weeks. Commercial customers will start seeing mobile notifications in the next few months.

Additionally, Microsoft has begun to show a Shared With Me section in Word, Excel, and PowerPoint on Macs, Windows desktops, Android, and iOS for Office 365 subscribers. The feature is designed to help users more quickly locate files that other people have recently shared with them.