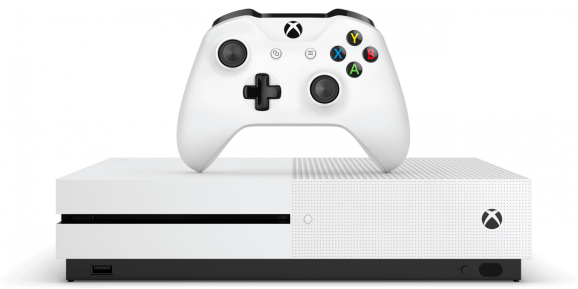 The Xbox One S.

The holiday shopping season has kicked off, and both Microsoft’s and Sony’s console brands are doing well.

Xbox was the fifth best-selling electronics brand online on Black Friday, according to Adobe’s annual market-tracking data for the United States. It came in behind Apple iPads, Samsung’s 4K televisions, MacBook Airs, and LG’s TVs, but it also outperformed Sony’s PlayStation and Nintendo’s 3DS and Wii U.

That means that the Xbox One was likely the top-selling console in the U.S. on the day after American Thanksgiving, which is also one of the most important shopping days of the year. But while Microsoft may have outdone Sony on that day, the launch of the PlayStation 4 Pro earlier in November still has Sony ahead for November as a whole, according to Adobe.

PlayStation 4 is still the best-selling product between the dates of November 1 and November 24. Xbox One is right behind it. When it comes to game sales, however, Nintendo is on top with Pokémon Sun and Moon. Call of Duty: Infinite Warfare, Activision’s latest entry in its military-shooter franchise, follows in second place.

What this all adds up to is a ton of spending leading into the December gift-giving holidays — especially when it comes to online purchases.

“Shoppers hit the buy button at unprecedented levels as conversion rates were up nearly a full percent across all devices in the evening hours on Black Friday,” Adobe Digital Insights analyst and director Tamara Gaffney said in a statement. “With the full day total coming in at $3.34 billion, Black Friday may have just dethroned Cyber Monday’s position as largest online shopping day of the year.”

This spending is coming at the right time. Some analysts have expressed concerns that certain games aren’t selling well at traditional retailers due to the presidential election. Adobe’s data suggests that digital and holiday shopping could make up that difference.