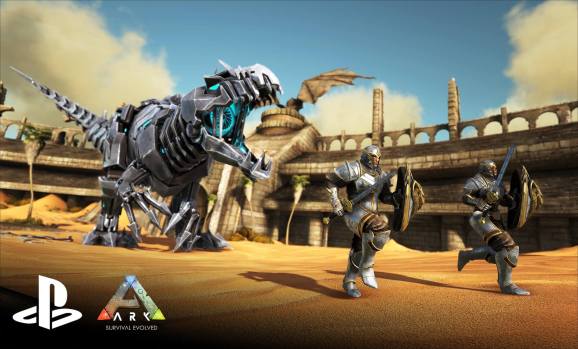 Think a T-rex is bad-ass? Try taking on a Bionic Giganotosaurus!

Studio Wildcard announced today that it’s bringing Ark: Survival Evolved, its hit survival game, to the PlayStation 4 on December 6. It’s already out in Early Access (a term which means releasing a game still in development and then getting player feedback — and selling copies, downloadable content, or other goodies — before release) for the Xbox One and PC via the Steam digital storefront. It’ll hit with the recent Scorched Earth DLC, and it’ll cost $55. Ark will exit Early Access on all platforms in its “1.0” version in spring 2017.

The package also includes a Bionic Giganotosaurus (this prehistoric terror is bigger than Tyrannosaurs rex!) and sets of Manticore armor for both men and women characters.

It’s a time of expansion for Ark. It released its first DLC, Scorched Earth, and despite complaints from some players about selling more content while still in Early Access, Studio Wildcard has seen even more growth since the pack came out. It also announced a VR experience on Tuesday. It’s even tried to become an esport.

Ark is a survival game, which means you craft items from material you harvest from the world around you … after starting the game naked, freezing, and hungry. You build things and explore, all while trying to avoid rampaging dinos, other threatening creatures — or other players. You can work together with those you meet, too. You can tame dinosaurs, ride them — even breed them (dino farming is a lost prehistoric art, you know).