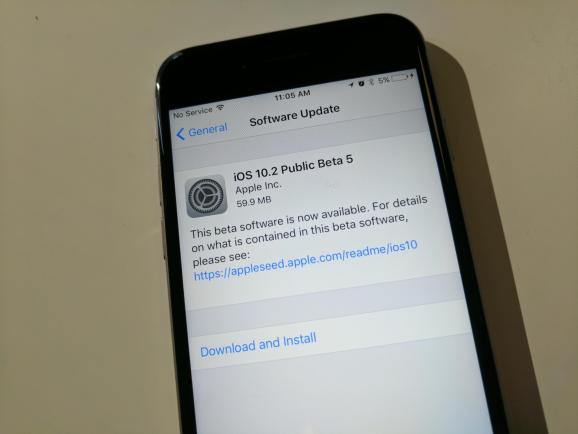 Apple today started rolling out the fifth public beta of iOS 10.2, the next update to its iOS 10 mobile operating system. Apple also made this update available today to developers.

The update doesn’t come with a ton of changes. But it does fix a bug that appeared in public beta 4: that some versions of iTunes would delete content from the recently introduced TV app. Also, if you’re on an iPod Touch, the TV app won’t crash or show the error message “TV is unavailable.”

But the new version of iOS does still have the problem that the TV app can’t be restored after it’s deleted.

The SOS emergency feature, which first debuted on the Apple Watch and appeared for the iPhone in 10.2 public beta 2, is still restricted to India.

These public beta updates are the best way to get access to the latest stuff coming out of Apple. If you’re already part of Apple’s Beta Software Program, you’ll be able to download the new version as an over-the-air (OTA) update. If you’re not part of the program, you can sign up now by going here. It’s free.

Or if you don’t feel like downloading each and every one of these public beta updates, you can just wait for the final version of iOS 10.2 to roll out to everyone. Which should happen in the next few weeks.