The Turtle Beach Stream Mic is one of the best microphones you can get for livestreaming gameplay directly from an Xbox One or PlayStation 4.

You may remember that I previously said it was a “good idea with poor audio” in the original version of this review (which you can still read below to maintain transparency). But after speaking with Turtle Beach and fiddling with my settings, I believe that my own human error was causing a strange issue that almost certainly won’t affect you.

So it turns out that the Stream Mic sounds nice, and it also has a suite of features that make it ideal for console broadcasters. That’s exactly the audience Turtle Beach is going for, and it’s those creators that’ll get the most out of it.

The Stream Mic sounds better than most headsets I’ve tried, and that’s the main competition for the Turtle Beach device. Because you can press a button and start livestreaming to Twitch from native apps on Xbox One or PlayStation 4, a lot of people have invested in headsets to improve the quality of their audio. But the Stream Mic is a step above anything you’d get in a standard gaming headset in the $100 range (OK — maybe the Turtle Beach Elite Pro headset with the optional audio controller and noise-canceling mic is better, but that’s in the $300 range).

What really sets the Stream Mic apart is that it does all of the processing inside the unit. That means it can filter out background noise and give you a better-sounding final product than even most USB microphones. If you’re in a loud room, Turtle Beach’s microphone is going to handle that situation far better than something like a Blue Snowball USB microphone plugged directly into a PS4 (it won’t work on Xbox One). It is also a serviceable mic for podcasts, interviews, and voice over work.

Having that built-in processing means that you can plug it into about anything and it should work. If you want to do a lot of audio recording, and you have an Xbox One, PlayStation 4, and PC, then the Stream Mic offers you a simple solution.

You will still, of course, get better results if you get dedicated equipment that enables you to do your recording through a PC or a sound mixer. But the point of the Stream Mic is that it can give you improved clips without having to complicate your setup. It just works.

Smart features like a stand, monitor line-out, and easy-to-change options.

I also like that the Stream Mic doesn’t take up a lot of space and comes with its own stand. You don’t need to go out and buy a separate device to hold it up in front of you while you play. That plays into the simplicity that Turtle Beach was going for. The stand ensures that you can set everything up and start playing with minimal effort.

Having the stand also enables you to easily reach all of the buttons and inputs on the device. That includes mute on the front and the audio-profile button on the back. You can change the profile on the fly, which is another way Turtle Beach helps you get by without having to bring a computer into your day-to-day recording.

Finally, the mic has a line-out for monitoring your own voice. That’s crucial for getting consistent levels, and it’s a feature that many USB mics do not include.

The stand picks up a lot of vibrations

While I like the stand, it can also pick up keypresses and bumps as annoying vibrations in the recording. You could potentially find a shock mount, which would eliminate those anomalies, but that defeats the purpose of the included holster.

The microphone’s quality is very good, but it’s not great. You’re still going to get better results on PC or PS4 from a $50 Blue Snowball (even if that doesn’t have mic monitoring) as long as your room isn’t overly noisey. If you’re working in a quiet environment, the processing of the Stream Mic is going to sound overly compressed and unnatural. You can adjust the settings to improve that a little, but that’s not going to perform miracles.

I recommend the Stream Mic based on its quality across a variety of potential scenarios. Now that I have it working as intended, I’ve decided that this is now my go-to mic for recording anything directly on a console. That is who it is for, and in that environment it performs wonderfully.

If you are considering investing in a recording setup that involves capturing footage on your PC and lots of post-production work, then you’ll get better results from something else (a Blue Yeti or an Audio-Technica 2020). But if you’re trying to keep it simple with the Twitch app on Xbox One, then you’re not going to get anything better for $100.

Turtle Beach provided GamesBeat with a sample of the Stream Mic for the purposes of this review. It is available now for $100.

Correction: This review was originally titled “The Turtle Beach Stream Mic is a good idea with poor audio.” I’ve updated the review because I was using the product improperly. For the sake of transparency, below is the original review text. 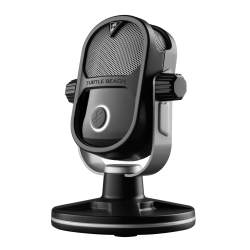