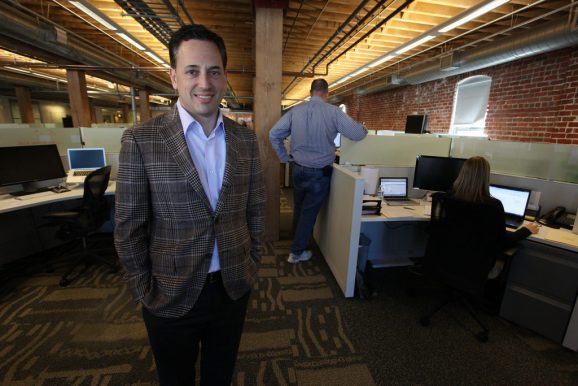 While Zenefits says that it’s always hiring, could one of the next people it brings on board be the successor to current chief executive David Sacks? The company is reportedly looking for senior managers to help grow its workplace benefits service, and it looks like one of those could be replacing Sacks, who was elevated to the CEO post about 10 months ago, after the resignation of founder Parker Conrad.

According to The Information, even if a new CEO were brought in, Sacks would not be leaving the company that he has helped navigate out of its past troubles. One possible role for him would be executive chairman.

“David Sacks is still the CEO of Zenefits and remains very committed to the company. The Board has total faith in him and appreciates the turn-around that he has executed,” a company spokesperson told VentureBeat in a statement. “As you know, this is not a role that David sought, but he accepted it without any compensation at the request of the Board to get the company past a crisis. Now that the crisis is over, David is leading a process to determine what senior talent the company needs to get to the next level. David has always put the company first, and if there’s any change in his role, you will hear that directly from him.”

It has certainly not been smooth sailing for the company that competes against Gusto, ADP, and other services used by HR and benefits administrators in their small businesses. It’s been less than a year since Sacks took over at Zenefits after multiple reports around compliance issues surfaced, including reports that salespeople were selling insurance to companies without the proper licenses. Soon after, 17 percent of the workforce was laid off.

Under Sacks’ leadership, the company sought to reframe its narrative and demonstrate that it is a serious and legitimate entity, a process that involved settling with various regulators.

But are the company’s troubles really behind it? According to a report from BuzzFeed, Zenefits is hemorrhaging cash and has gone through $200 million in the past year, $100 million of that in the first half of its current fiscal year. A spokesperson sought to downplay the losses, telling the news outlet that the company has made efforts to reduce the burn rate and has been making strides in cutting costs.

The launch of Zenefits’ Z2 platform, the next-generation product aimed at expanding the company’s capabilities, held symbolic significance for a startup turning the page on a troubled past. And Sacks has adamantly maintained that things are better and that any rumors of the company’s impending demise are outrageous. He has repeatedly stated that many of the issues plaguing Zenefits happened “under previous management” and that he’s “very confident in saying that our problems are over.”

There are certainly multiple ways to consider the report that someone new may soon be taking the helm. Have investors lost confidence in Sacks’ ability and want to replace him? Or is this the natural course of business, signalling that Zenefits is about to enter a new phase? Bringing on senior managers certainly makes sense with respect to the company’s expansion into multiple areas, including payroll, insurance, and more.

Updated as of 9:57 p.m. Pacific on Friday: David Sacks has confirmed that he intends to step down as CEO and will become chairman “focused on product and strategy.” He also claimed that Zenefits now has “a clean bill of health.”