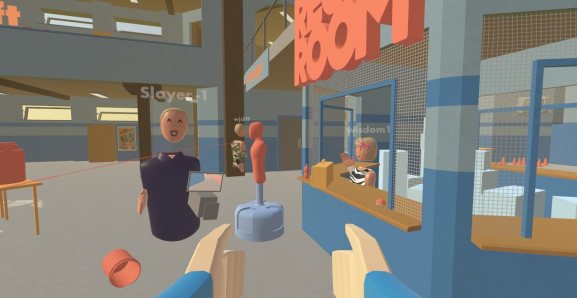 Rec Room works on both Rift and Vive.

I don’t know which company is going to make the best next-generation virtual reality headset, but I do know that chances are good that it will work with the apps you buy on the Steam PC gaming platform.

Oculus releases its Touch motion controllers this week (December 6), and they feature some impressive technology. Touch brings your hands into Oculus Rift games by tracking your mitts in a way that is similar to how the HTC Vive’s wands work (these come with the headset). The two controller solutions are so similar that Steam VR — the software that powers virtual reality games on Vive — works completely as intended if you plug in an Oculus Rift and Touch instead. This opens up a possibility where you purchase your hardware from Oculus but get your games from Steam instead — and that’s probably what you should do.

The Oculus Store has a handful of interesting exclusive games that are worth experiencing, but Steam is where developers are experimenting. Owning a Rift and Touch ($800 combined) is the easiest way to get access to both of those ecosystems. And while this might look like it’s a win for Oculus, I think that — in the end — SteamVR’s open standard should benefit Valve Software, which owns and operates Steam.

As I explored the Touch, I immediately noticed that many of the games that support the controllers were ports from Steam and Vive. The only difference is that when I booted them up on the Oculus Store, games like Rec Room and Space Pirate Trainer only worked with the Rift. On Steam, however, the system would recognize both headsets with no extra effort.

To me, this screams one thing: You should buy your multiplatform VR games on Steam instead of the Oculus Store.

Steam VR games work with Oculus Rift and Touch. None of Oculus’s features are missing when you’re in Valve’s environment. That’s partially because no multiplatform game takes full advantage of the Touch’s finger-sensing capabilities, which is the primary difference between the Touch and Vive wands.

Even if the Rec Room developer added finger-pointing to its game, I have confidence that Valve is going to bring support for those Touch features to its platform. The company has made promises to keep Steam VR open and compatible, and it is also working on its own next-gen, finger-tracking Vive controllers. So it’s likely only a matter of time before those features start showing up in VR games on Steam.

But buying games on Steam over the Oculus Store isn’t so much about getting the most from today’s VR equipment. Instead, Valve’s dedication to openness gives me confidence that no matter headset brand I buy in the future, I will always have a way to use my growing library of Steam VR games. I don’t have that confidence if I were to switch from Oculus Rift to an HTC Vive 2 when it comes to games on the Oculus platform.

So no matter what hardware you buy into, I recommend investing most of your software budget into Steam VR instead.