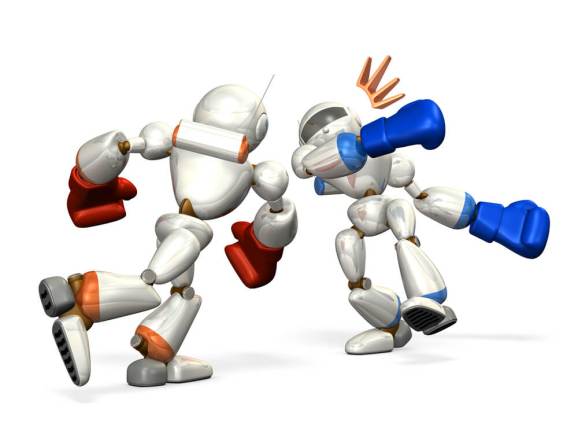 In a recent study by Gartner Reports, the analyst estimated that by 2020 the average person will have more conversations with bots than with their spouse. The report failed to clarify if this was attributed solely to increasing dependence on AI technology, or if deteriorating spousal relations played a role as well. I suppose it could be a blend of both. What is clear is that there is an inevitable trend moving from screen interfaces to chat interfaces that has all major tech companies scrambling to ensure they have a place at the table in this AI assistant future.

It is no exaggeration to say that the business models of most major tech companies rely heavily on users looking at a screen. Currently the lion’s share of Google’s income comes from ads, and Amazon is reliant on users shopping from their computers or smartphones. What happens if suddenly people stop Googling random questions, instead simply asking their phone “What is the name of the guy with the weird teeth in that TV show about the 1920s?” or requesting their AI assistant to order their dog’s favorite brand of grain-free dog food? The threat to their business is losing transactions on these AI queries to competitors.

Thus the goal is to become the AI assistant that handles all daily transactions for users. With this in mind, both Amazon and Google have released voice-powered assistant platforms, called Alexa and Google Assistant, respectively. Both are hoping to leverage a baseline of built-in features to attract third-party developers to make the offering even more robust for users, by building their own applications directly into their AI assistants.

But the question for developers is: Which is the better bet to build into?

In terms of actively attracting third-party developers, Amazon has certainly come out firing. The company has already launched an SDK to allow developers to build “skills” into its platform. Amazon even went so far as to partner with Techstars to launch an accelerator for companies that want to build products based on the Alexa platform. However, it had good reason to take the initiative early — Google has some major advantages for developers that Amazon will struggle to gain ground on, despite being the first mover.

First, by the nature of Google’s offering over the past 18 years, it has gotten really good at processing random requests. The range of things I have asked Google for help with this week is pretty broad, and staggering when I consider my searches over the past five years. Multiply that by the billion or so users worldwide and you get a sense of how much of a head start Google has on creating the world’s best AI assistant. An AI is only as good as its dataset, and Google is sitting on the world’s largest trove. This is an unignorable advantage.

The benefits are already apparent. Reading any comparisons of Google Home versus Cortana, Siri, and Alexa always shows Google winning hands down in overall usability. This is even before the highly anticipated release of the Google Assistant SDK for developers, which is due out sometime this month (I will give a more in-depth review once that goes live).

Google’s built-in advantage with handling random requests is further bolstered by its strong focus on both machine learning with TensorFlow and natural language understanding with its recent acquisition of API.ai. These are great tools already available for AI developers. Once Google adds a conversational component with the Google Assistant SDK, it will seem like the obvious choice for any AI/bot developer teams looking to build into an AI assistant platform.

It feels like Amazon might even know it, too. Already Amazon is positioning its AI assistant, Alexa, around its core competency — shopping.

To encourage users to get in the habit of making voice-assisted purchases using Alexa, the company is offering special deals valid only for items bought through Alexa. Furthermore, Amazon appear to be focusing on home-related services. In head-to-head comparisons with other AI assistants, Alexa always gets high marks on prompts related to in-home interactions. Whereas Google Assistant still has a limited range of Internet of Things (IoT) products that it can interface with, Alexa appears to have the ability to allow you to boss around any household appliance you feel compelled to.

Alexa also has an unsurprising stranglehold on voice shopping due in no small part to the mountain of user data Amazon gathered from billions of shopping transactions. If you ask Alexa to order that grain-free dog food, it can remember your dog inexplicably hated the salmon flavor and recommend you buy the elk flavor again.

It appears Amazon may be trying to position its offering as your at-home butler, awaiting your every beck and call once you cross your threshold. Because of this, IoT teams would do well to consider building into the Alexa platform. However, Google could quickly gain ground here once it officially launches its SDK for third-party developers, many of which may be IoT-focused.

Now for a couple of the highlights from my head-to-head comparison of the two services. The first big difference was the ability to ask Google Assistant follow-up questions. I asked Google Assistant when the new Stars Wars is coming out (because I am a huge nerd and that was a real question in my mind at the time). I was then able to simply ask where it was playing close to me, without needing to reference the Star Wars movie again. With Alexa each statement is standalone, meaning you need to remind her what you are talking about each time. Seems small, but this is huge in terms of being able to talk with your AI like a real assistant and not like you are dictating your search queries.

My next follow-up question — asking for directions to the theater — highlighted another area of Google’s expertise. Alexa was only able to give me the distance to the theater, which is about as helpful as baking directions that only tell me how much flour and eggs I need. Google, by comparison, is able to leverage its Google Maps and route me an exact course, even accounting for traffic levels.

Ultimately, it appears that Google is willing to do what it takes to win at being the world’s go-to AI assistant. This will almost certainly translate into creating the most user-friendly experience for third-party developers. One could view its recent move to make API.ai completely free for developers as a sign of its no-holds-barred approach to monopolizing this new terrain. Also, don’t forget the sheer amount of raw data Google has on users, which conceivably will be available to third-party developers to optimize and personalize their interactions with users.

In this war of the words, it appears Amazon may have come out swinging first, but that at the end of the day, Google is the one with the knockout punch.