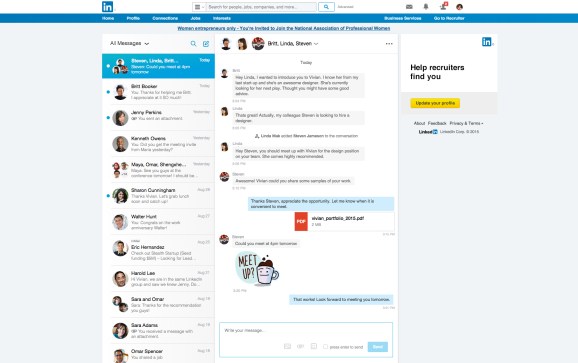 LinkedIn has added a feature it hopes will make it easier for you to network with people you’re interested in talking to. Starting today, when you’re messaging someone to connect with them, the professional social network will display what it calls “conversation starters.”

“We know that reaching out to reconnect, ask for advice or network for potential job opportunities can be intimidating, so we’ve added personalized conversation starters in LinkedIn messaging to give members authentic ways to break the ice,” the company said in a blog post.

It’s one thing to message someone you already have a rapport with, but what if you’re in sales or trying to land that next job, or simply wish to connect with someone you idolize as a thought leader? It can be difficult to come up with something to say that’s unique and not the same old “Hi” message that the person always receives.

With conversation starters, you compose a message like normal, but before you begin, tap the new lightbulb icon located just above the keyboard. LinkedIn will then present you with a series of options that you can use, which it derived using machine learning and is related to that person’s profile and history — it seems that you won’t find those cookie cutter-type introductory messages here. Choose the one that you want to start with, customize it based on how you speak, and hit send.

LinkedIn shared that updates around professional activity, such as when the person started their job, celebrated a work anniversary, or published an article on the social network, will be featured. In addition, you can find out any shared experiences between you, such as school, employers, or groups, along with any mutual connections.

“Now, members can spend less time figuring out what to say, and more time having conversations that help them get ahead and reach their professional goals,” the company remarked.

Adding conversation starters to messaging is an attempt by LinkedIn to increase usage of the product. It has begun making strides to make actions happen on the social network, even creating a bot that will soon launch that helps multiple people arrange their schedules to make a meeting possible.

“People are using [LinkedIn Messaging] to have great conversations with recruiters and their connections. They’re doing it faster than before, and it’s giving people a great reason to connect with their networks,” said Mark Hull, the company’s senior director of product management, in an interview with VentureBeat earlier this year. He shared that more than 500 million InMail exchanges have been made to date. The addition of conversation starters will likely encourage reconnecting with friends, coworkers, and other professionals.

While this feature will be good for LinkedIn, it’s not exactly an original idea. It follows the likes of Google’s Smart Reply feature which was released last year, and there’s certainly huge interest from big companies eager to use machine learning to predict what we’ll want to share and communicate.

The release of this feature comes the same day as Microsoft received approval from all regulatory agencies overseeing its acquisition of LinkedIn.