Gamers all know that moment when you’re out tracking down monsters in Pokémon Go but you’re also running out of energy. Well, Starbucks is about to come to your rescue with the Pokémon Go Frappuccino Blended Crème drink … if certain rumors are accurate. 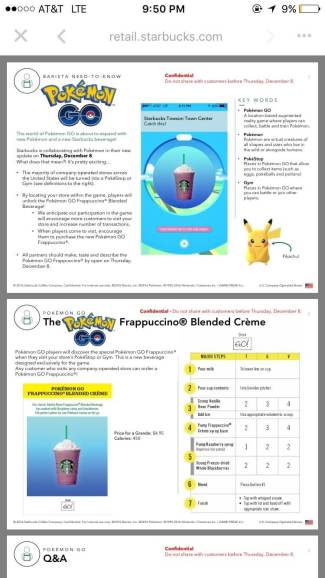 Above: It’s beginning to look a lot like Pokémas.

Leaked images allegedly from a Starbucks employee website claim that Pokémon Go is getting new creatures as part of an update that will roll out Thursday, December 8. A Starbucks promotion involving the aforementioned caffeinated frozen beverage will all begin that day. If this information is true, it’s likely that one of the year’s biggest mobile games will roll into the important holiday season for the $36.6 billion smartphone-gaming market with plenty of new content for its players.

“The world of Pokémon Go is about to expand with new Pokémon and a new Starbucks beverage,” reads the promotional material that is allegedly from the coffee chain. “Starbucks is collaborating with Pokémon in their new update on Thursday, December 8.”

I’ve asked Niantic, The Pokémon Company, and Starbucks for more information and will update this story with any comment from the involved parties.

Over the last couple of days, fans on the Pokémon Go forums around the internet have begun talking about the possibility of this promotion to introduce up to 100 new creatures in the game. GamesBeat reported that developer Niantic was working on a huge update featuring Gen 2 creatures in late November, and now that is starting to play out as several different sources have posted the Starbucks materials online.

So what does this all mean for Pokémon Go players? The 100 new creatures are likely from the Gold & Silver games that debuted on Game Boy in Japan in 1999 and in North America in the year 2000. Those games introduced 100 new creatures, and it’s highly likely that those are the 100 new pocket monsters that Niantic is prepping for the game.

As for Starbucks, the company allegedly explains in those materials how it will affect its stores:

Starbucks is not supposed to talk about the drink or the promotion until December 8, according to a “Confidential” notice on its employee info sheets. So expect to hear more then if this rumor is real.