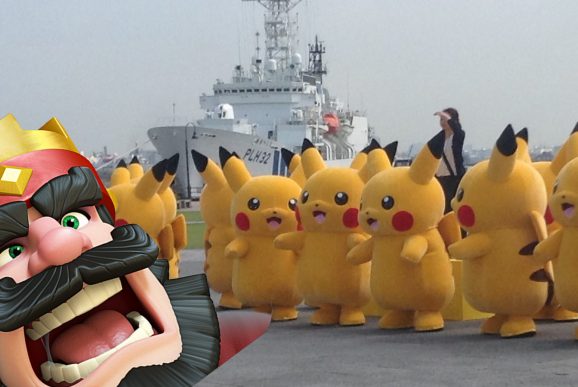 The king is having the last laugh.

Pokémon Go wasn’t the best game of the year on iPhone. At least that’s what Apple is saying.

The iOS company revealed the results of its official Game of the Year awards for iPhone, iPad, and more. The iPhone Game of the Year, which is arguably the biggest category, went to developer Supercell’s Clash Royale head-to-head strategy battler. That app has players facing off against one another by dropping cards from their deck onto a battlefield. That cards then turn into units with various capabilities. It’s a free download, but you can of course spend cash to improve your deck, so you can face even better players with better cards (which makes you want to spend more money on cards to improve your deck). It’s a vicious cycle, and it’s the best game that came out for iPhone in 2016, according to Apple. That means it beat out Niantic’s Pokémon Go. That location-based Google Maps-powered game that has players catching digital pocket monsters in the real world was the only mobile game to outgross Clash Royale on iPhone.

Most of those games are deserving of recognition — although I would argue that EA made some small downgrades to the overall quality of FIFA to make it run better on older phones on slower networks. But that’s something Apple might approve of as it considers qualifications for its Game of the Year list.

Reigns is especially noteworthy. From developer Nerial and publisher Devolver Digital, the game turns the act of swiping on profile pictures from matchmaking apps into a gameplay mechanic as you take on the role of a king. Each new profile pictures comes with new choices, and those choices will have consequences.

I’m not the biggest fan of Clash Royale, but I won’t deny its quality. It has one of the best presentations on mobile platforms, and it is incredibly playable. Supercell also made synchronous multiplayer work on smartphones, which is something that most people thought couldn’t work on a massive scale. But Clash Royale turns into a bummer when you hit that wall where you are doomed to never advance unless you spend all of your free time playing or invest a significant chunk of money.

But I can see why Pokémon Go didn’t make this list. Many of its basic features were broken for months, and its presentation looks cheap compared to what Supercell is doing.

Here’s the full Game of the Year list from Apple for each of its platforms:

Games of the Year: