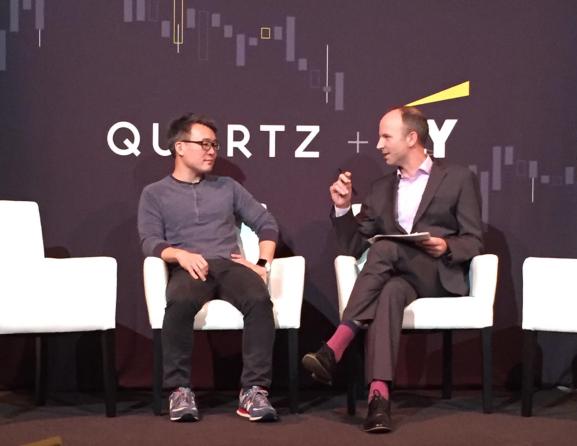 Fitbit cofounder and CEO James Park talked about his company’s plans to delve into healthcare at a San Francisco event hosted by Quartz yesterday. This followed an earlier announcement that Fitbit has entered into a partnership agreement with Medtronic, the California-based medical technology company specializing in diabetes.

While the public’s attention is currently focused on Fitbit’s acquisition of Pebble assets, Park wants to look toward future developments, which are centered on medicine. “Wearing a Fitbit should be able to save your life,” he said, insisting that a wearable device is trendy now, but could become a medical aid in the future. Drawing a clear correlation between daily activity, exercise, and glucose level is the next step, according to Park.

Fitbit had an extremely successful initial public offering (IPO) in June last year, but its shares have dropped from $47.60 last July to a wobbling $8. Of course, the acquisition of Pebble’s software and intellectual property (IP) could boost its product line and help its shares recover. And fostering deals with healthcare leaders like Medtronic could broaden the company’s market scope beyond fitness fanatics, reducing its dependency on consumers by banking on strategic partnerships.

In terms of production, the company has started to use robots for the assembly of microscopic parts. “We’re moving to full automation in the manufacturing of our devices,” said Park. He added that Fitbit will focus more intently on sensors and AI in the near future, in the hopes of fine-tuning the technology and improving the reliability of health monitoring.

But it’s one thing to record the number of steps a consumer takes, and it’s quite another to inform a diabetes patient of their glucose levels. Fitbit has already been hit with a class-action lawsuit filed by angry consumers who alleged the wearables’ heart-monitoring technology was inaccurate. Even the accuracy of Fitbit’s distance-tracking technology was scrutinized recently after a bug was found in the company’s Charge 2 wearable.

Delving further into the medtech sector could also tickle the curiosity of the U.S. Food and Drug Administration (FDA) and slow down the company’s product developments. “When I look at where we are today, there is still so much work left for us to do in order to affect health outcomes,” Park concluded. Fitbit is Park’s third company and was founded in 2007.