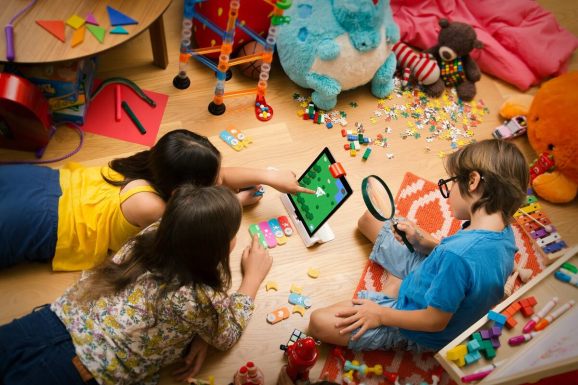 Osmo has made its mark with award-winning augmented reality iPad games for children, and now it is teaming up with some big kids brands and announcing it has raised $24 million in a new round of funding. It’s a big validation for a new kind of game and toy company that grew up in Silicon Valley.

The funding for Palo Alto, Calif.-based comes from Mattel, Houghton Mifflin Harcourt, Collab+Sesame (maker of Sesame Street), Calibrate Partners, and existing investors Accel, Upfront Ventures, and K9 Ventures. Pramod Sharma, CEO of Osmo, said in an interview with GamesBeat that his company is in the process of making augmented reality games with Mattel and Sesame Street, the first time it is working with such major kids brands.

“We’ve gotten very good traction in schools, and we are ready to scale it up in the next year,” Sharma said. “This is great validation, but Osmo is in a very early part of a long journey. We have to keep building things that kids love.”

The magic comes in as the iPad camera, with the help of Osmo’s artificial intelligence software, recognizes the objects thrown in front of it. If you have put the correct pieces in front of the tablet, the app generates a positive response. Using this basic technology, combined with AI and computer vision, Osmo has created a bunch of games for kids. The company has launched eight games so far, including three this year.

Previously, Osmo has launched the Osmo Pizza Co., where kids learn how to run a pizza shop and develop entrepreneurial skills. It has used physical, interactive play to teach kids how to code with Coding and to spark creativity with Masterpiece and Monster. The company’s first product was recognized as one of Time Magazine’s 25 Best Inventions of 2014, and it continues to be a favorite of teachers, parents, and kids alike.

“With the launch of Monster this year, we learned how valuable it is to have a good intellectual property,” Sharma said. “The money is about investing in new areas, building our platform, and developing technologies like computer vision and A.I.”

The funding will build out Osmo’s suite of mixed-reality experiences, underlying reflective AI technology and help the company launch on its first non-iPad device, the iPhone. Previously, the company’s games were designed to work with the iPad.

“A lot is happening,” Sharma said. “Mattel and Sesame Street are bringing their characters to the Osmo platform. It’s the first time these two companies have collaborated since Tickle Me Elmo.”

Currently used in 22,000 schools globally, Osmo will partner with Houghton Mifflin Harcourt to develop and introduce new and innovative play opportunities for education. Collab+Sesame brings deep knowledge and experience, and access to its educational framework and expertise.

“Collab+Sesame enthusiastically supports Osmo in the creation of educational products that will help more children learn valuable lessons through engaging play,” said Tanya Haider, executive vice president of strategy, research, and ventures at Sesame Workshop, in a statement. “By providing our expertise in early childhood development, research, and whole-child curriculum, we can aid entrepreneurs and help more children become smarter, stronger, and kinder in the process.”

Former Googlers Sharma and Jerome Scholler started Osmo in 2013. The company has 50 employees and 10 contractors. Over time, the company shifted its focus for its AR technology from adults to kids. Osmo has raised $38.5 million to date. Sharma said the projects with Mattel and Sesame will be announced later. Sharma said he hopes to have 70 to 80 employees by the middle of next year.