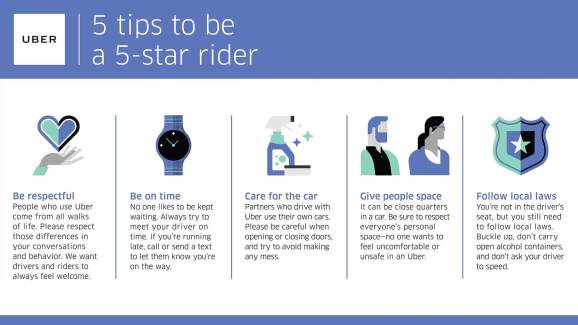 Uber's rider guidelines for how you should behave

Uber has updated its guidelines to make it clearer to riders which actions could cause them to be banned from the service. By publishing its policy, the company wants to leave no doubt as to how both riders and drivers should behave.

“Most riders show drivers the respect they deserve. But some don’t — whether it’s leaving trash in the car, throwing up in the back seat after too much alcohol, or asking a driver to break the speed limit so they can get to their appointment on time,” explained Rachel Holt, Uber’s head of North America, in a blog post. “This kind of poor behavior is not OK, which is why we will take action against passengers who are rude, abusive or violent.”

Under the revised community guidelines, Uber is stressing a few main points: Riders and drivers must respect each other, including not shouting, slamming the car door, or swearing. Riders must pick up after themselves and leave the vehicle in the same condition as when the ride began. And the company wants to make a critical point about tolerance: “Remember that when you use Uber, you will meet people who may look different or think differently from you. Please respect those differences. We want everyone to feel welcome when they use Uber.”

Another ground rule is that personal space must be respected and that under no circumstances should there be any sexual conduct between drivers and riders. Everyone must also follow the law, including buckling up and not transporting firearms in the vehicle. Drivers have to maintain the speed limit, not text while driving, use a phone mount, and refrain from consumption of alcohol or drugs.

Should children use the service, Uber requires that they be supervised by a legal guardian.

Uber said it encourages feedback at the end of every ride to ensure that everyone takes responsibility for their behavior. “This accountability creates a respectful, safe environment for both riders and drivers,” the company said.

It’s surprising that rider guidelines haven’t been published previously, but perhaps the assumption was that it was fairly obvious what kinds of things would get you kicked off the service. Now it’s officially in writing. Drivers have had guidelines for a while, with policies around the quality of their vehicles and rides, the minimum average rating they need to maintain, the cancellation rate, safety, policies prohibiting drugs and alcohol, and more.

Amid the conclusion of the controversial U.S. election season, a few companies have reached out to their employees to state unequivocally that they have a safe working environment. The publication of Uber’s rider and driver guidelines falls into a similar category, as the company notifies its users throughout the U.S. that it expects everyone to be courteous and respectful to each other, without exception.

These new guidelines are only for those in the U.S., and Uber said that it’ll be reaching out to everyone starting tomorrow. In addition, the company stated that it worked with its Safety Advisory Board to develop these rules.