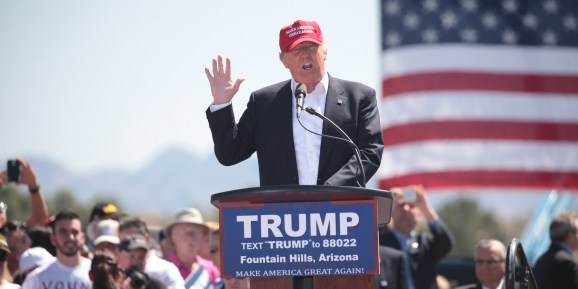 Ten years into its existence, the social media platform is struggling more than ever with trolls, hate speech, and even terrorist organizations. Executives have been more aggressive against groups like ISIS, and the service has banned some notable trolls. But now it’s facing perhaps one of its toughest calls ever:

Is President-elect Donald Trump violating Twitter’s terms of service? And if so, what (if anything) is Twitter prepared to do about it?

The questions have arisen in the wake of a New York Times story this week about the impact of Trump’s tweets on a union leader in Indiana. The headline is headshaking on its own: “Trump as Cyberbully in Chief? Twitter Attack on Union Boss Draws Fire”.

His target was Chuck Jones, president of United Steelworkers Local 1999, who has been mildly critical of Trump’s boasts about how many jobs he saved with his deal with Carrier of Indiana. In response, Trump tweeted:

Chuck Jones, who is President of United Steelworkers 1999, has done a terrible job representing workers. No wonder companies flee country!

If United Steelworkers 1999 was any good, they would have kept those jobs in Indiana. Spend more time working-less time talking. Reduce dues

The result, according to the Times:

Mr. Trump’s message to his 17 million Twitter followers set off threats and other harassing calls to Mr. Jones. One caller left five one-minute messages, and two secretaries answering phones at the local’s headquarters have been similarly swamped.

A conservative and an academic made clear what they thought of Trump’s tweets and the result:

“When you attack a man for living an ordinary life in an ordinary job, it is bullying,” said Nicolle Wallace, who was communications director for President George W. Bush and a top strategist to other Republicans. “It is cyberbullying. This is a strategy to bully somebody who dissents. That’s what is dark and disturbing.”

Robert Dallek, a presidential historian, called the verbal attack unprecedented and added: “It’s beneath the dignity of the office. He doesn’t seem to understand that.”

The issue here is Trump’s words, his position of power and influence, his choice of targets, but also how his followers react en masse to such criticisms. His Jones tweets are certainly far from his most personally abusive. And yet, he must know by now if he singles someone out for criticism, his Twitter followers are going to swarm them not just on Twitter, but also with phone calls and other threats.

Indeed, the Washington Post has a similar story this week about a young woman who asked Trump a critical question last year at a town hall. Trump followed up by tweeting:

The arrogant young woman who questioned me in such a nasty fashion at No Labels yesterday was a Jeb staffer! HOW CAN HE BEAT RUSSIA & CHINA?

How can Jeb Bush expect to deal with China, Russia + Iran if he gets caught doing a “plant” during my speech yesterday in NH?

The result, according to the Post: “Her phone began ringing with callers leaving threatening messages that were often sexual in nature. Her Facebook and email inboxes filled with similar messages. As her addresses circulated on social media and her photo flashed on the news, she fled home to hide.” The young woman in question was then 18 years old and a private citizen, not a political operative.

Under the section “Twitter’s Rules,” which is part of its TOS, the company says under the category of “Abusive Behavior”:

We believe in freedom of expression and in speaking truth to power, but that means little as an underlying philosophy if voices are silenced because people are afraid to speak up. In order to ensure that people feel safe expressing diverse opinions and beliefs, we do not tolerate behavior that crosses the line into abuse, including behavior that harasses, intimidates, or uses fear to silence another user’s voice.

More specifically, Twitter lists the following behaviors that are not allowed:

Trump’s words themselves in these two cases may not be specifically abusive or violent. But given that this followers show a pretty clear pattern of behavior, it seems one could argue that he must be aware of this by now, and he would then in violation of the “incite” part of that TOS. There could also be an argument about indirect threats of violence.

Twitter says it could take the following measures if someone was in violation: “Any accounts and related accounts engaging in the activities specified below may be temporarily locked and/or subject to permanent suspension.”

I put these questions to Twitter’s PR team. A spokesperson responded that the company could not reveal whether it had received complaints or was investigating a specific user, but did emphasize: “The Twitter Rules apply to all accounts.”

In October, reports emerged that Facebook employees had pushed for Trump to be banned from that service. CEO Mark Zuckerberg responded during a town hall meeting that the “implications of removing them were too drastic,” according to the Wall Street Journal.

There will be some people who would argue that there are freedom of speech and first amendment issues at play here. But even as someone who is a near absolutist on such issues, I don’t think that applies here. Twitter is a private service, allowed to make rules as it sees fit. It is not obligated to allow anyone to broadcast on its service, just as the New York Times is not obligated to print anything that anyone wants to say.

On the other hand, if the government moved to shut down Twitter or close the New York Times, then we’d have a true freedom of speech crisis.

Of course, should Twitter warn, temporarily suspend, or permanently suspend Trump, we could expect it to be nothing short of a political earthquake, and it would put the company in the crosshairs of his followers. Already, throughout the campaign, Trump followers were constantly complaining that Twitter was rigging the trending topics on the site to downplay anti-Clinton and pro-Trump topics.

Conservative newsite Breitbart, when covering previous statements that no one was exempt from its rules, wrote: “The announcement comes at the end of a year where Twitter has waged open war against conservative media, consistently banning accounts that make fun of progressive politics or whose users openly support Donald Trump, including that of Breitbart’s Milo Yiannopoulos.”

Kicking Trump off Twitter would also be a serious business decision. There is no doubt that Twitter has been a centerpiece of this campaign season in terms of both influence and usage. Given Twitter’s precarious outlook, doing anything that alienated a large part of its user base is financially risky.

Still, rules are rules. And how to handle Trump’s unique influence and temperament is a call Twitter has to make, one way or the other.