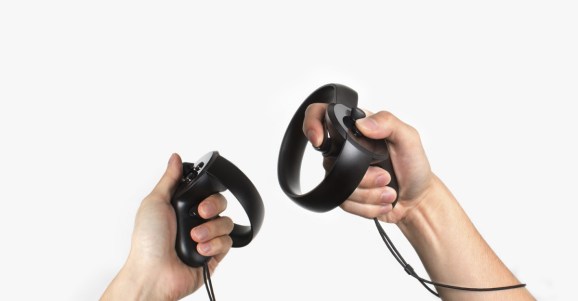 The Oculus Touch controls let you navigate independently with each hand in VR.

Last week, UploadVR let you know about 10 great SteamVR games that work well with the Rift and Touch by default. Now that the Touch controllers have officially released into the world, we decided to tackle the topic in a bit more detail. How well do the Oculus Touch controllers work with SteamVR apps that are only designed with Vive in mind? Is anything unplayable? What are the common hiccups and limitations? Is it even worth buying things that may or may not get official support?

First of all, calm down, because that’s a lot of questions. Second of all, I’ll be sure to answer them as best I can. It’s impossible to test each and every game on Steam using Touch simply because there are nearly 1,000 VR supported games and applications on Steam right now, over 800 of which feature some type of tracked motion controller support. Of those 800, all of them support the HTC Vive officially, whereas only 180 support the Oculus Rift. Of those, not all of them are optimized for Touch, but rather may be optimized for the Razer Hydra, or another third-party peripheral.

The short version is that Touch is very new and most VR motion controller games on Steam don’t support either the Rift or the Touch officially right now. But that doesn’t mean they won’t work anyway or get official support in the future, thus here we are. Here’s everything you need to know.

Assuming you don’t own a Rift already, you’ll want to go through the entire setup process from start to finish — including your Touch controllers. If you do have a Rift already, then you can just worry about setting up your Touch controllers. Depending on the configuration you choose, you may use either two or three sensors. Two front-facing sensors is the standard arrangement for using Touch in a 180-degree setup and will enable you to play all of the Oculus Touch titles on Oculus Home. However, two sensors diagonally across the room enables experimental 360-degree tracking, which should support all standing playspace apps on Steam.

But if you spring for a third sensor, then you can access roomscale tracking, which allows you to more freely move around and across the entire room inside the headset using your controllers. That’s what we compared to the Vive in our detailed roomscale breakdown here. You’ll need roomscale capabilities to play many of the best SteamVR titles.

After completing the Oculus Home setup process, you’ll want to launch Steam VR and launch the “Run Room Setup” option. This will walk you through the process for either a standing or roomscale arrangement, depending on your configuration. Everything’s very self-explanatory and Steam should automatically detect your sensors, both Touch controllers, and your Rift itself.

As of the time of this writing, the beta branch of SteamVR has fully enabled haptic feedback for the Touch controllers, finally, and remapped many of the default button configurations. For example, a week ago, accessing the SteamVR overlay inside the Rift using Touch meant pressing the A button (or maybe it was the B button?) on your right hand, which felt awkward. Now it’s the menu button on your left hand, which feels much more natural. You can still get to Oculus Home by pressing the right-handed menu button, just like you would in any VR app through Home.

Essentially, you’re running the Oculus SDK in the background with SteamVR running over the top of it. Once you finish all of that, virtually every SteamVR app — whether it claims to support the Rift or not — should run. In the case of Google Earth VR, you may need to trick it into running, since Google decided to limit that program to Vive only for now. But for the most part, you should be able to get Vive games running with your Rift and Touch.

Now things start to get a bit tricky. While every VR app on Steam should open up and play inside your Rift without any questions, the Vive and Rift do have some minor differences. If it isn’t officially supported by the developer, it may have some performance issues or slight variations in how well things run.

In the case of the Touch controllers, things are even more varied. To understand why, you have to understand the differences between the controllers themselves. The Vive wands are vertical devices that you grasp your hand around with rings on top. On the face of the device you’ll find a large track pad which you can move your hand around as a touchpad, or also click in various spots to access different functions. Above that is a button that can access options or items and below that is a menu button that can also be used to turn on the controller, then on the sides, where your fingers wrap around, you’ll find the grip buttons, often used for picking up objects in games. Finally, beneath the ring at the back is a trigger that you pull for shooting and selecting things inside the game world.

Initially, this may not seem like a big deal, but it actually can be in some cases. For example, in Tilt Brush, you use the touchpad on your offhand to slide a scale to increase the brush’s width. With a touchpad, when your thumb reaches the edge and you’ve maxed it out, you simply lift your thumb off and the input stops. In the case of a Touch controller, releasing the stick resets it to the middle, canceling out part of your input. The same thing happens regardless of the direction you tilt the stick, making it difficult to use some options in certain VR apps. In Tilt Brush, I found a workaround by exiting out of a menu while sliding the width option preserved it without defaulting back when I released the control stick.

Another example is with Onward, a military simulation shooter. It works great once you get the hang of everything, but one of the trickiest parts involves reloading. Each gun operates differently, so it takes a bit of getting used to your weapon of choice, but in some cases on the Vive you’d click the bottom part of the touchpad down on your dominant hand to release the magazine, but on the Oculus Touch, I found that pressing the analog stick down, then clicking it, felt far less natural.

The same goes for teleportation in apps like The Lab, which ask you to click the touchpad and point to teleport. On the Oculus Touch, clicking a thumbstick repeatedly to move around gets old pretty fast. Arizona Sunshine, when played on the Touch via Oculus Home, lets you teleport by simply tilting the stick instead of clicking it — an example of specific optimization.

The natural orientation for holding a Vive wand is vertically, like you would a hammer, whereas your hands wraps around the Oculus Touch controllers and the app in question may interpret that orientation as you pointing the controller down. The result is that some games, such as The Brookhaven Experiment, may think you’re pointing the gun downward or in some other direction because it isn’t optimized entirely for the controller you’re using.

We explained all of this to make it clear how things stand currently. Yes, most SteamVR Vive games run on the Rift with Touch, but not all of them are optimized for it. You’ll find issues here and there until more developers add in official support — if they even decide to. With Valve working on its own new experimental prototype controllers that stylistically resemble the Oculus Touch controllers, we could be moving closer to a world of unity between platforms, but only time will tell.

For our preference, we prefer the Oculus Touch controllers as a whole, but still rank the Vive above the Rift with Touch and three sensors as an overall roomscale tracking solution.