Ultrahaptics had an touching demo at the VRX virtual reality conference last week. It used ultrasound technology so that I could feel things in VR using my own fingers. While wearing a VR headset, I reached out and held a virtual ball. My fingers were in mid-air, but it felt like I was touching something.

The Bristol, England-based company wants to bring “haptics” technology to VR to make it more immersive. VR does a great job of giving you the feeling that you are in a location, but that illusion breaks down as soon as you try to touch something. With better haptics, VR will be in a better position to hit its target of generating $14 billion in software revenue by 2020, according to market researcher SuperData Research.

The inspiration for Ultrahaptics came from Tom Carter, founder and chief technology officer of the company. He started working on his ideas in college in 2009, and started the companay in 2013 with partner Steve Cliffe. 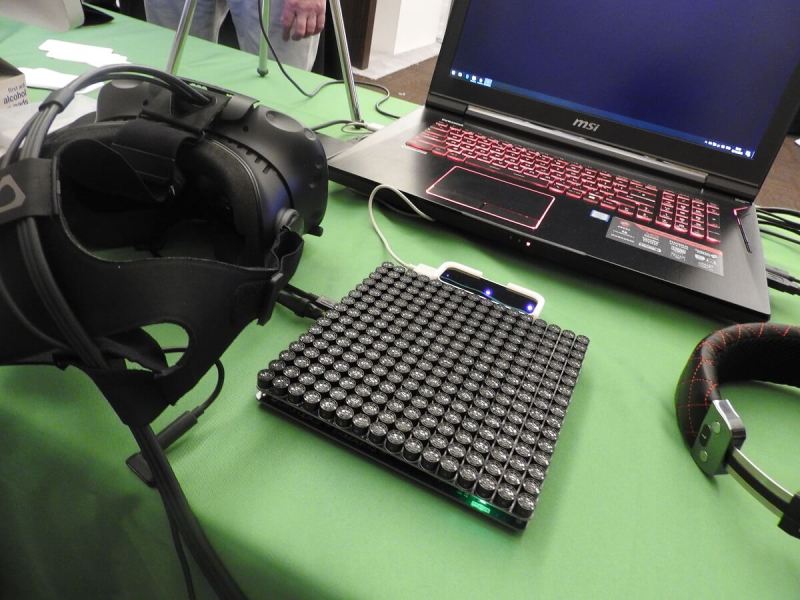 Above: Ultrahaptics’ sound board gives you a sense of touch.

The company has a demo of the technology that allows you to feel things by sending vibrations over the air to your fingers. Carter told me that the pad in front of the computer was a collection of dozens of small speakers. The speakers emit ultrasound waves that go a couple of feet up into the air. When I put my hand into the space directly above the speakers, I could feel the sensation of touch. When I passed my hand over an imaginary barrier, I could feel the sensation. When I pulled my hand out, it stopped.

The sound is enough to displace the surface of the skin. It was a slight feeling, but it was real. Carter said the amount of vibration can be calibrated to different frequencies to create different sensations.

In the demo at VRX, the company showed that it can give you the feeling of passing your hand through a barrier. In the VR demo, you could pick up some balls and push them out of a dish. It was the slightest of sensations, but it worked.

The company raised $872,000 early on, and last year it raised another $12.5 million. Investors include the IP Group in the United Kingdom, and Woodford Investment Management. In 2014, Ultrahaptics generated about $60,000 in revenue. That turned into $500,000 in 2015 and an estimated $2.5 million this year, said Cliffe, who serves as CEO, in an earlier interview.

Roughly 80 percent of car makers have an Ultrahaptics development kit. The company has lots of patents and no direct competitors at the moment. Taptical Haptics uses a different kind of touch feedback in controllers, involving vibration motors. OmniWear is creating devices you wear around your neck that give you haptic feedback from a game.

At the moment, Ultrahaptics can’t stop your hand from pushing through a virtual object. So it can’t simulate something solid like the feeling of a table, as you’ll always be able to push your hand through it. But Carter said the technology can recreate more nuanced sensations, and various textures.

Leap Motion, which enables you to use your hands in VR (but currently without the sensation of feeling), was part of the demo. The Leap Motion camera shows exactly where your fingers are so that Ultrahaptics can figure out where to send the sensations.

You can see how this technology would be useful in games, but the company has plans to use it for other applications, like controlling things in cars without needing to take your eyes off the road. Another possible application: hospital elevators. The buttons in elevators have a lot of germs, due to contact with human hands. If you could make the elevator move without pressing a button, that would help stop the spread of germs. You could also use the technology at an ATM machine, as someone observing you wouldn’t be able to figure out your pin code if you were just pressing buttons in the air, Cliffe said. 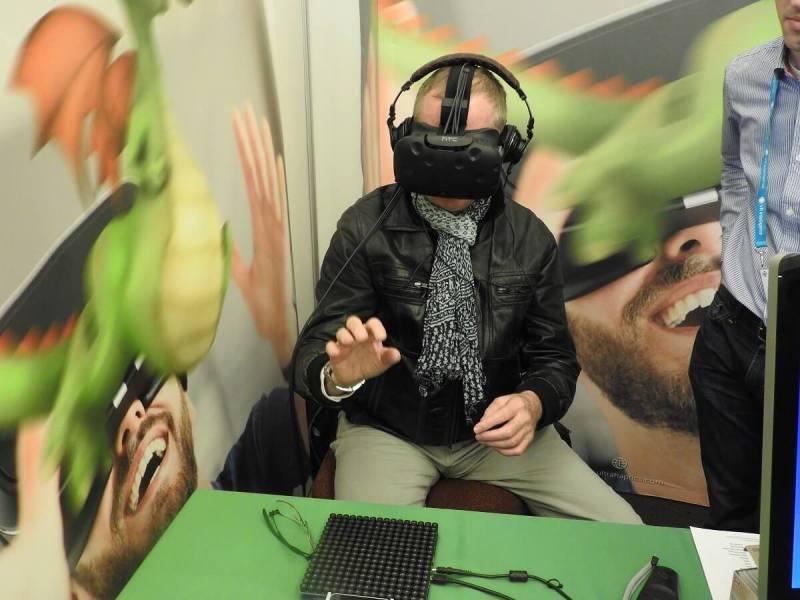 Above: A demo of Ultrahaptics’ sense of touch in virtual reality.