In a mobile gaming industry full of one-hit wonders, Finland’s Supercell has managed to sustain its steady success while embracing a unique corporate culture that defies conventional management wisdom.

The company organizes itself to give developers autonomy to create games, working in what the company calls “cells.” Rather than spamming out game after game to see what sticks, the company routinely kills titles far down the development road that don’t meet its standards. The result is that while it still only has four official releases, three of those games (Clash of Clans, Boom Beach, Hay Day) brought in $924 million in profits on $2.3 billion in revenue for 2015.

The latest title introduced this year, Clash Royale, is on pace to bring in $1 billion during its first year after a strong debut. And all four games still regularly appear at the top of grossing-apps rankings, even in some cases several years after their introduction.

As Supercell continues to think about how to move ahead, it’s pursuing the future in its unorthodox fashion. Rather than trying to figure out how to maximize revenues and profits from its titles or how to accelerate its own growth, it’s focused on extending the experience for players in ways that (for the most part) won’t necessarily generate new direct revenue streams. And it wants to do that and stay small at the same time.

During a visit this week to Supercell’s headquarters in Helsinki, CEO and cofounder Ilkka Paananen explained that his goal today was the same as when he started the company in 2010: Maintaining a culture that celebrated creativity rather than profits.

“For me, it was about this very simple sentence: The best people make the best games,” he said. “Games as an industry are really all about the creative part.”

Supercell faced a possible challenge toward maintaining those ideals when its major backer, SoftBank, decided to sell its ownership stake. The company helped select Tencent to buy those shares in large measure, Paananen said, because the founders were reassured that they would be able to continue operating independently and pursue a path that was not necessarily about maximizing short-term profits.

“They have their own history in gaming,” Paananen said. “They understand how important it is to give operational independence to gaming companies. It’s all about the people.”

In trying to think about the future of Supercell, then, many of the conversations could continue to focus on enhancing user experiences. The company wanted to find a way to expand its universe in a non-game way, he explained.

“We are not doing this to diversify our revenue base,” he said. “This is our way to give back to our players. Everything we have achieved is thanks to our players.” One way Supercell plans to do that, and perhaps the most overtly commercial of all its new initiatives, is a figurine store it will introduce early next year. No initial prices are in place for the figurines, but he said they will be high-quality but priced mostly to cover costs of making and shipping them. 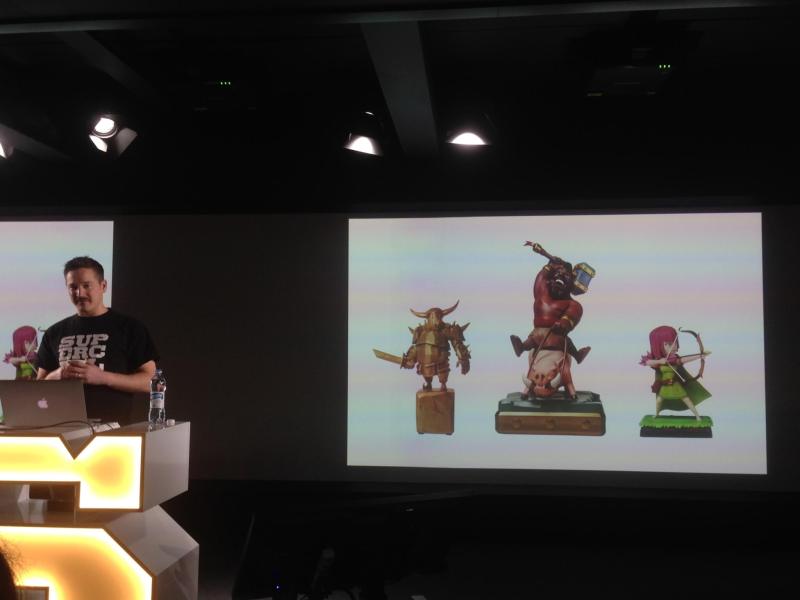 Above: Supercell will introduce an online store in 2017 to sell figurines of its game characters.

Next is an official plunge into esports. With the success of Clash Royale this year, Supercell noticed players organizing tournaments around the world on a spontaneous basis. The company decided to get involved and has begun organizing its own esports tournaments, 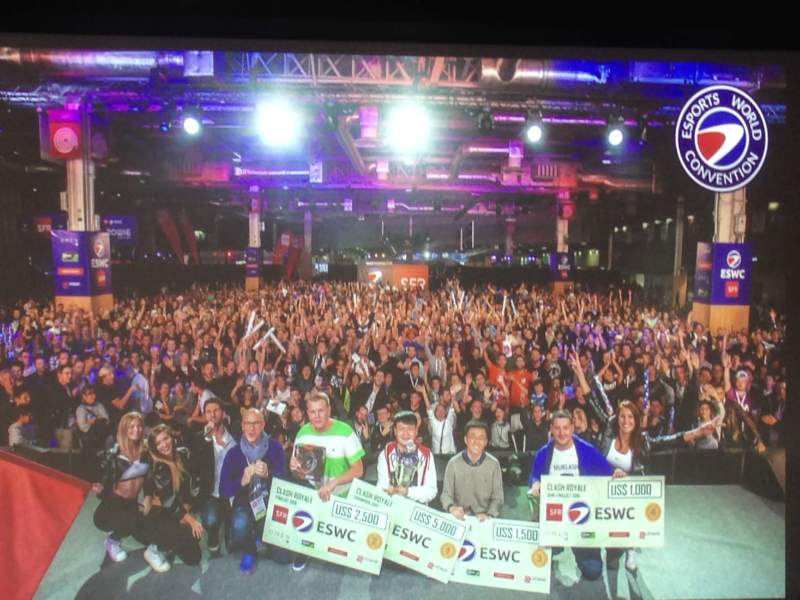 Above: A Clash Royale esports tournament at the recent Paris Games Week.

Supercell later this month is holding the Clash Royale North American Open, which will be a series of duels between select players that culminates with a final on December 17.

“We wanted it to be easier and more entertaining to watch these events than most esports today,” he said. “We wanted to explore how we can produce content around them in a way that’s enjoyable. So, we hired two comedians from The Daily Show to host the competition.”

Those entertainment partnerships also include a new animated series being developed called “Clash-A-Rama.” Three former writers from The Simpsons created the 10-episode Web series, which will debut later this month featuring pop culture takes on many of the Supercell characters.

For Supercell, however, all these things continue to take a back seat to the actual creation of games. As the company considered its future, it wanted to find other ways to get involved in building titles outside its own walls. So, earlier this year, it invested $7.8 million, acquiring a 51 percent stake in fellow Finnish mobile game developer Frogmind, creator of the Badland series of mobile releases. Essentially, Supercell can support more game development without hiring a ton of new employees that could put a strain on its own culture.

“That’s the first time we did anything like his,” Paananen said. “This was a way for us to make an ever bigger impact on the games industry. We wondered, ‘How could more people benefit from what we think of as a unique company?'”

Despite what feels like a frenzy of new initiatives, Paananen stressed that all of this is being done in a way intended to not distract the company from its core mission. 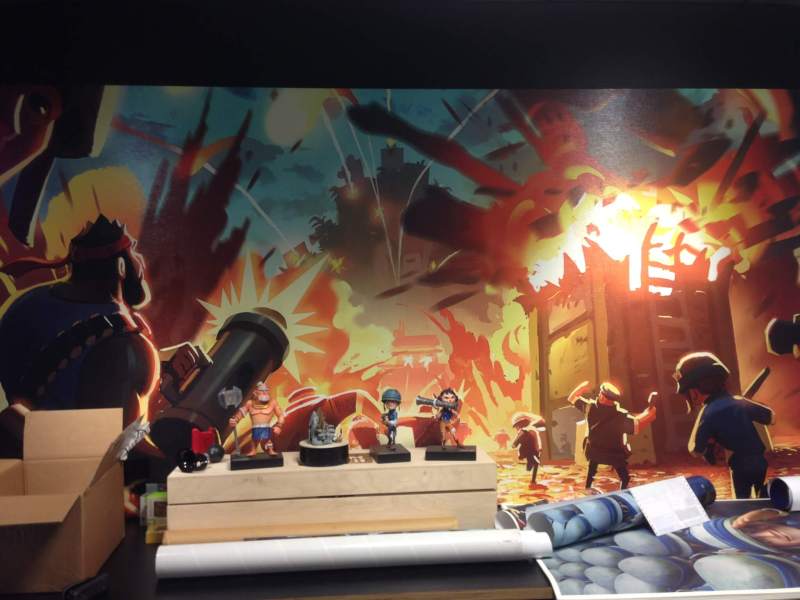 Above: A mural inside Supercell’s Helsinki headquarters. 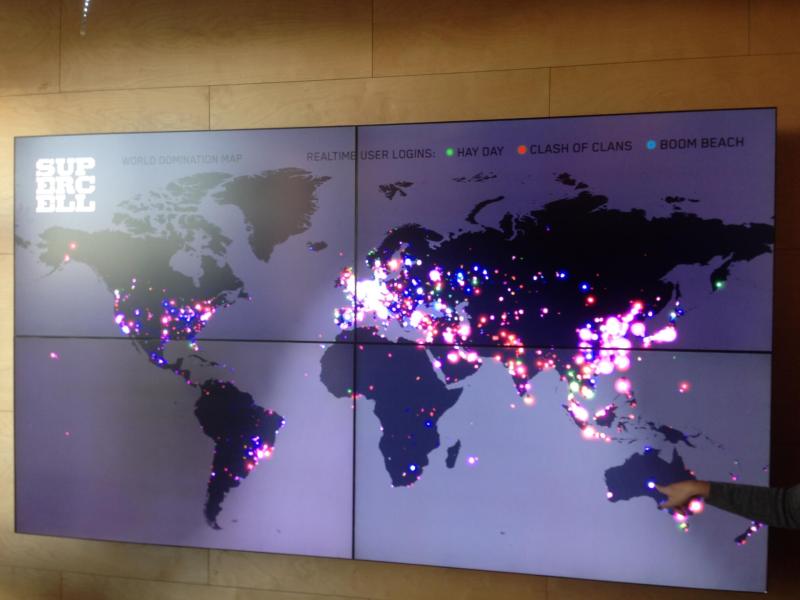 Above: A heat map that shows current players of Supercell games in the company’s HQ. 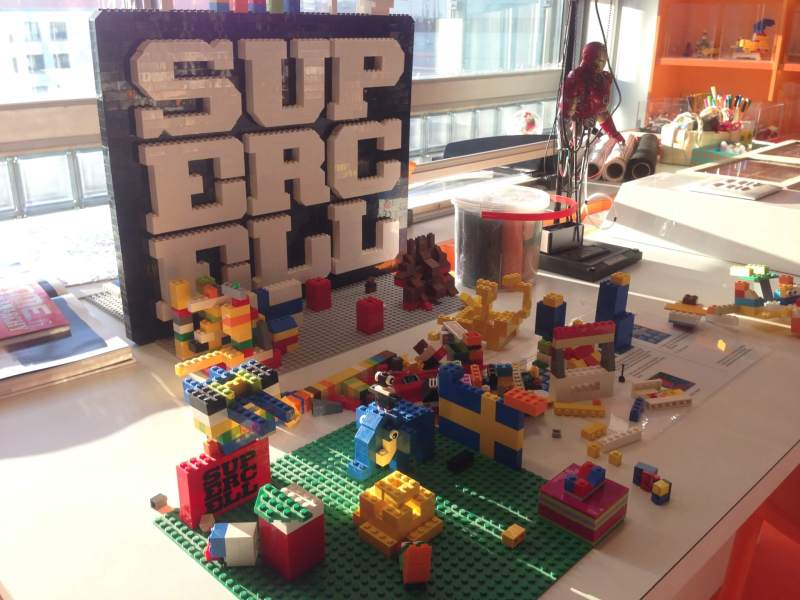 Above: A breakroom in Supercell’s HQ.