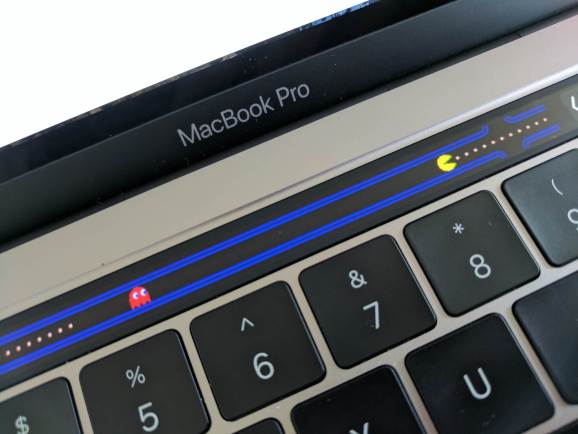 Big software makers like Adobe, Atlassian, and Microsoft have been enhancing their apps with support for the Touch Bar on the new version of Apple’s MacBook Pro laptop. But that doesn’t mean it’s only for serious things. The Touch Bar is turning out to be an interesting experimental platform for developers.

Earlier this week, third-party software development group Utsire got attention for a Mac app that turns the Touch Bar into a piano keyboard. Independent developer Yuhui Li built an app that lets you play Chrome’s you-are-now-offline dinosaur game on the Touch Bar. Developer Guilherme Rambo made an engaging app called SpaceFighter that has you flying in a tiny fighter jet and dodging and shooting down enemies. Developer Julian Thayn made Rocket, a Touch Bar app for quickly switching to different apps. Perhaps the most attention-grabbing Touch Bar app so far is Hung Truong’s sophomoric TouchFart app. (Do I really need to tell you what it does? OK, fine, it makes farting sounds when you tap the poop emoji and other buttons.)

But now, the Touch Bar has its very own version of Pac-Man, the hit Namco game from the 1980s. It’s fittingly called Pac-Bar. Kid developer Henry Franks wrote the app exclusively in Swift, Apple’s open-source programming language, and blessed it with Pac-Man’s classic sounds and graphics. Given the physical constraints of the Touch Bar, the game is limited to a single horizontal line, and unfortunately, you use the arrow keys as the controls, not the Touch Bar itself. But it’s nonetheless fun, if you don’t feel like pulling out your phone or tablet or console.

Franks, 15, wrote the app in a few hours on his MacBook Air, using Xcode’s Touch Bar Simulator, he told VentureBeat in an email. “I made the app for fun and to see what the Touch Bar is capable of in terms of running games,” he wrote. “I would definitely be open to supporting it in more serious apps in the future because I thought it proved to be quite versatile.”

At this point, it’s unclear if Touch Bar-only apps like Pac-Bar will catch on or whether they’ll turn out to be a bizarre artifact of the introduction of the 2016 MacBook Pro. But right now, there is definitely a subculture forming around the Touch Bar, and that’s important because it shows that some people are willing to see what they can do with the new MacBook Pro, as opposed to ignoring it amid perceptions that it’s unnecessarily expensive, underpowered, or lacking ports that aren’t USB-C.