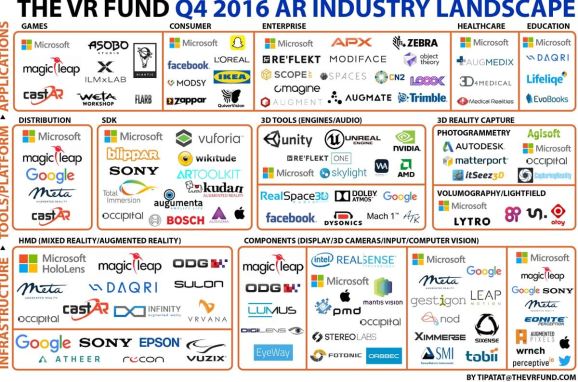 The Venture Reality Fund has released its latest augmented reality landscape research, which shows dozens of companies that are developing the infrastructure, tools, platforms, and apps for the fast-growing AR ecosystem. The landscape helps to visualize all of the companies in the space, and it also helps categorize the competition.

The fund also has a VR industry landscape for the fourth quarter of 2016. You can see both landscapes under the Resources tab of the Venture Reality Fund’s site.

“We provide this as part of our commitment and service for the ecosystem education and growth,” said fund cofounder Marco DeMiroz, along with fellow cofounder Tipatat Chennavasin, who created the landscapes.

The Venture Reality Fund (also known as the VR Fund) is a Silicon Valley-based venture capital firm focused on early-stage investments in the virtual reality (VR), augmented reality (AR), and mixed reality (MR) spaces. Founded in January 2016, and currently with 15 companies in its portfolio, the firm is one of the world’s most active early-stage VR/AR investors. This landscape is based on extensive research and information gathered during more than 1,500 meetings with companies in the space.