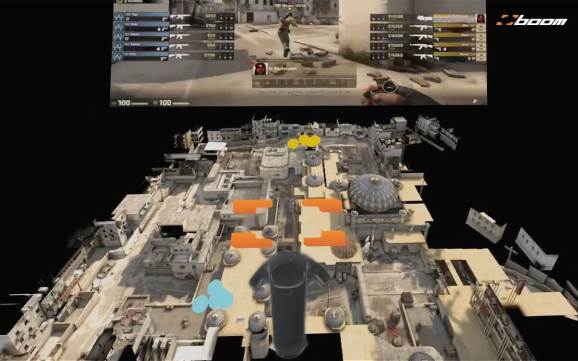 Boom.tv lets you see gameplay from any view you choose.

Boom.tv is announcing today that it has raised $3.5 million to build its 3D livestreaming platform for esports. The platform is intended to make it much easier to watch esports events from any point of view that the spectator chooses.

The Redwood City, California-based startup lets viewers experience gameplay from any perspective on any device. The platform builds a 3D experience from the player’s game stream in real time, enabling a fan to figure out the best vantage point for viewing a battle in games such as Counter-Strike: Global Offensive and League of Legends.

“We want to revolutionize the way esports are viewed and experienced,” said Sumit Gupta, CEO of Boom.tv, in an interview with GamesBeat.

It works on PCs and mobile devices, with support for virtual reality coming soon. The company hopes to take advantage of the growing audience for esports, which is predicted to hit 292 million in 2016, according to estimates by market researcher Newzoo.

With Boom.tv, the company hopes the viewer experience will be far more exciting, social, and interactive than even watching traditional sports broadcasts.

The technology works because games are created in 3D and rendered in 2D to fit a screen. Boom.tv captures the 3D before it is rendered into 2D and then it re-creates the experiences from the 3D stream.

No prior integration from game developers is required. The app, available in beta starting today, also allows streamers to create one-click highlight montages and easily share them to social media, opening up the potential for new sponsorship opportunities.

Boom.tv will soon release an update to the app that will allow streamers to broadcast in virtual reality, delivering an immersive experience that simulates actually being in the game. With this update, viewers will be able to experience the game stream in full VR using the headset of their choice.

“Their team of 30 engineers have both the passion and know-how to build an end-to-end solution that will completely enhance the eSports spectator experience, particularly in VR,” said Chris Fralic, partner at First Round Capital, in a statement.

Boom.tv will use the seed funding to support the top 10 esports titles and expand its platform to the larger gamer and esports communities. The funding included participation from First Round Capital, Tandem Capital, Crosscut Ventures, Betaworks, Boost VC, Bitkraft Esports Ventures, and select angel investors.

Boom.tv’s 3D livestreaming platform is currently available for esports titles CS:GO and League of Legends. Interested streamers are encouraged to sign up for the beta here.

The company was founded in 2015 by Gupta, who founded Bash Gaming and sold it to GSN Games, and Ha Nguyen, a computer vision expert who authored one of the first augmented reality engines.

The two worked with top streamers to figure out the features and have been testing it with existing broadcasting software.

“They can use Boom.tv to call instant replays and camera angles,” Gupta said.