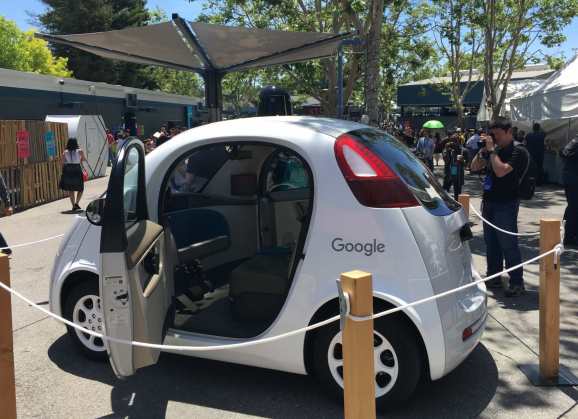 Google self-driving car at Google's I/O developer conference in May 2016.

Google today announced that it’s spinning off its nearly 8-year-old self-driving car division and making it a division of its parent company, Alphabet. It will now operate under the new company name Waymo under the leadership of chief executive John Krafcik, formerly president and chief executive of Hyundai North America.

“We’re a self-driving technology company with a mission to make it safe and easy for people and things to move around,” Krafcik wrote in a Medium post.

Other Bets have not been a big moneymaker. But “revolutionary ideas drive the next big growth areas,” as Larry Page explained in a letter to investors last year announcing the change, and as such should be able to run independently. Now the car group is becoming more independent. Last year Bloomberg reported that Google was looking to make this exact move.

It’s being announced a few months after the head of the group, Chris Urmson, left. Urmson is now reported to be working on a self-driving car startup.

On the FAQ page for its self-driving car organization, Google talks about why it got into that area in the first place:

Our goal is to transform mobility by making it easier, safer and more enjoyable to get around. We believe that the full potential of self-driving technology will only be delivered when a vehicle can drive itself from place to place at the push of a button, without any human intervention. For example, there are many people who are unable to drive at all who could greatly benefit from fully self-driving cars.

Apple, Baidu, Lyft, Tesla, and Uber, among others, are also working on self-driving car technology. Waymo is currently testing its vehicles in four locations in the U.S.

In 2014 Google unveiled a prototype car that had no steering wheel, rear-view mirror, or gas pedal. The prototype included components from Bosch and LG, among others.

But Google has also been willing to have carmakers do the bulk of the work in terms of producing cars, while it focuses more on software. In May the company said it would be expanding its self-driving car fleet as a result of a partnership with Fiat Chrysler.