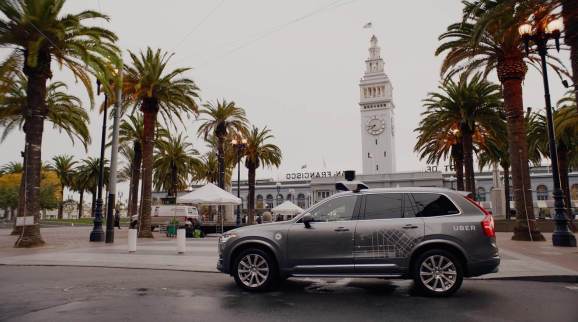 An autonomous Uber in San Francisco

Uber may have announced the launch of its self-driving vehicles in San Francisco, but California regulators are basically putting a halt to operations, saying that the on-demand ride service still needs to obtain the right permits.

In a statement, the Department of Motor Vehicles wrote: “The California DMV encourages the responsible exploration of self-driving cars. We have a permitting process in place to ensure public safety as this technology is being tested. Twenty manufacturers have already obtained permits to test hundreds of cars on California roads. Uber shall do the same.”

Earlier this week, it was revealed that Uber was bringing its autonomous vehicles to San Francisco after testing them in Pittsburgh. Just hours ago, Uber publicly announced its launch, bringing a fleet of Volvo XC90 cars to the city’s riders, available through the UberX service. The DMV, which is tasked with granting permits to companies that want to test their self-driving cars and technology, was apparently caught off-guard.

Uber apparently didn’t think it needed to obtain permits. “We understand that there is a debate over whether or not we need a testing permit to launch self-driving Ubers in San Francisco,” explained Anthony Levandowski, head of the advanced technology group at Uber, in a blog post. “We have looked at this issue carefully, and we don’t believe we do. Before you roll your eyes and think, ‘there they go again’, let us take a moment to explain. First, we are not planning to operate any differently than in Pittsburgh, where our pilot has been running successfully for several months. Second, the rules apply to cars that can drive without someone controlling or monitoring them. For us, it’s still early days and our cars are not yet ready to drive without a person monitoring them.”

Well, Uber thought wrong, and California wants it to play by the same rules as all the other companies that are testing their self-driving automotive technology. Of course, this isn’t the first time that Uber has run afoul of regulators, and it has shown a proclivity for pushing forward regardless of opposition. This might be one of those cases where it’ll continue testing while working with the DMV on a solution, namely obtaining that permit.

We’ve reached out to Uber for comment and will update if we hear back.