It’s impossible to tell by looking at my desk right now, but I hate clutter. One of the reasons I’ve preferred wireless gaming headsets over PC speakers is because the former takes a couple of things off of my workstation. I bet I’m not alone, and now Creative’s Sound BlasterX gaming division has made a product for you and me.

The Sound BlasterX Katana soundbar is a $300 audio system that is due out soon from Creative. Like other soundbars, it combines what would typically be three speakers into one unit. But unlike a soundbar you might get from Samsung or Vizio for your television, Creative built this one specifically to go underneath your desktop monitor. That’s a subtle change, but it makes a big difference.

Yo, the Katana can get loud, and it won’t struggle to fill most offices or game rooms with thunderous, raucous audio.

It helps that Creative has essentially stuffed a full, TV-quality soundbar into a minimal profile that should sit right in front of you as you work or play. As you approach maximum volume (in normal use I was at about 20 percent of max), you might start to feel like that old Maxwell advertisement that has the man getting blown back in his chair by a speaker.

No matter how much you turn up the volume, the Katana can handle it. Creative’s processing and drivers chew through your PC’s digital signals and spit out clear, lively music or media audio. A big part of this is the directional speakers, which separate the various audio channels without compression or overlapping. The upfiring midbass drivers do a lot of the work in ensuring that your entire room is brimming with precise midrange frequencies.

The Katana also includes a subwoofer that you’re supposed to place right underneath your desk. It is just as capable as the rest of the system. Even when you turn down the Creative soundbar to its lowest volume, you can often still feel the sub booming from the next room. Katana has a number of modes to bring out the most from your audio source, but one of those is also a “night” mode that will minimize the spikes in volume and reduce the bass from the subwoofer to levels that won’t shake your whole house.

Oh, and the thing has its own built-in soundcard. That means if you want to plug in a 3.5mm analog headset into it, you’ll get higher quality audio than jacking it directly into your motherboard.

Fits wonderfully under a monitor 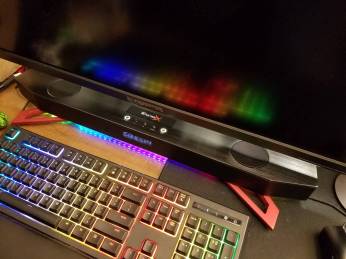 Above: The Katana in action.

The performance of these speakers get a big boost from their placement. When you have the Katana underneath your monitor, it’s really easy for its quality and volume to overwhelm you.

But it’s not just about the sound, it makes a ton of sense to have speakers underneath your screen. It’s easy to reach the controls, for example. I don’t need a mechanical keyboard with built-in audio knobs because I can just reach up a few more inches and slap the volume button on the Katan itself. Even better, I can switch instantly between audio inputs or sound profiles because Creative has included dedicated buttons for those options.

Its size means the Katana also doesn’t stick out or take up extra space. My monitor is already using this space on my desk, and now I can add a high-quality sound solution into that same real estate. And with a second monitor, game controllers, a keyboard, a mouse (with a Gigantus mouse pad), VR headset sensors, and more junk vying for square inches on my physical desktop, I adore the way the Katana cleverly reuses space.

Has plenty of extra features

I’ve already mentioned a few extras about the Katana that I’m happy with. The “night” mode is crucial if you live with other people, but the bonus inputs for a microphone and headset, an included remote control, and Bluetooth/USB/auxiliary connectivity options are all welcome features that increase the versatility and usefulness of the soundbar.

But I also like Creative’s Aurora RGB LED lighting. Every gaming-peripheral maker on the planet has their own LED lighting scheme now, but Creative’s is no worse. With the Katana, the speaker features an array of lights the fire down onto your desk. This creates an ambient light show that can end up looking quite beautiful.

Creative gave the Katana a dark speaker grill on the front that is surrounded by an aluminum body with a shiny black finish that catches your eye once you get over the beautiful LED display. It’s a sleek package with sharp, silvery metals accenting its edges. Those elements give it the look of high-quality stereo equipment. I’m not personally a fan of the Sound BlasterX logo taking up about two inches on the top-center of the device, but that’s the only part of the visual design that clashes with what is otherwise a device that looks like it could cost way more than $300.

Given the Katana’s capabilities and features that enable it to work with consoles, computers, Bluetooth devices, and more, I would’ve liked for it to be able to pass through an HDMI signal. The optical option will eliminate the need for HDMI in most cases, but HDMI works with even more devices. And I know some people will want that option.

If you’re building a gaming room, I would put the Katana on a list of equipment that you need to own. While testing it, I had it set up on my desk patched into my PC and connected to a PlayStation 4 while I reviewed The Last Guardian. As I kicked back in my chair, the Katana frequently blew me away with its performance. Combine that with its compact form-factor, and it’s an ideal audio solution for just about any dedicated gaming space. You can’t beat it for the price, and you’d need to jump up to a dedicated audio receiver and surround sound speakers to do better — and that’s a lot more expensive.

Creative sent GamesBeat a sample unit of the Sound BlasterX for the purposes of this review. It is coming soon for $300.