Fieldrunners Attack! has hit the iPhone as the third major release in a series that has amassed more than 10 million paid downloads since 2008.

The game is now available on iOS, and it’s the first free-to-play title in the series. The new game from Cambridge, Mass.-based Subatomic Studios has some of the same wacky humor and fast-action that made the first two Fieldrunners games so much fun.

The original Fieldrunners debuted on the iPhone in October 2008 as a premium paid title, while Fieldrunners 2 debuted in 2012. Formal work on Fieldrunners Attack got started in 2014.

Your goal is to defeat the Mootilator and conquer the world. The game presents a whole new side to the Fieldrunners universe that will charm both fans and newcomers alike, said Sergei Gourski, cofounder, in a statement.

You can engage in multiplayer skirmishes, assemble your army and declare war using exploding chickens and more. Aside from your core infantry such as Soldiers, Rocketeers, and Tanks, you can unlock and level up an eccentric variety of zany heroes, including egomaniacal extraterrestrials and psychopaths, to tailor your strategy. You can also pit your forces against the dastardly Mootilator in a rich solo campaign that offers dozens of missions to tackle.

In battle, you can separate your troops and wage multi-pronged assaults thanks to the game’s direct control mechanic that allows you to individually manage each of your squads. But to be able to unleash a formidable army, you’ll need to manage your affairs back at the headquarters. This means leveling up your barracks, managing your farms and refineries, and generally creating an impenetrable fortress ringed with shiny armaments — such as Gatling, Missile, and Flame towers — to keep your enemy’s hands off your loot.

“We’ve invested a huge amount of time during development into crafting an experience that we hope will charm newcomers but delight our existing fan base at the same time,” said Jamie Gotch, Subatomic Studios CEO, in a statement. “We believe we’ve found the right sweet spot and look forward to seeing fan reactions when we go live.”

At first, Subatomic Studios teamed up with Flaregames in Germany as its publisher. But that relationship ended earlier this year. Subatomic self-published the game. The company has 15 employees, and it has funded itself from the profits of its previous games.

Hopefully this game is good as the first two. I spent a lot of time and money on the earlier games. 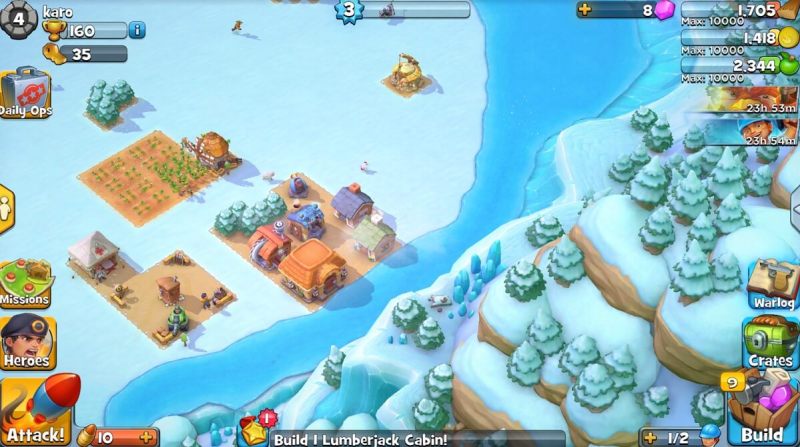 Above: Fieldrunners Attack! is latest in a series that has had more than 10 million paid downloads.