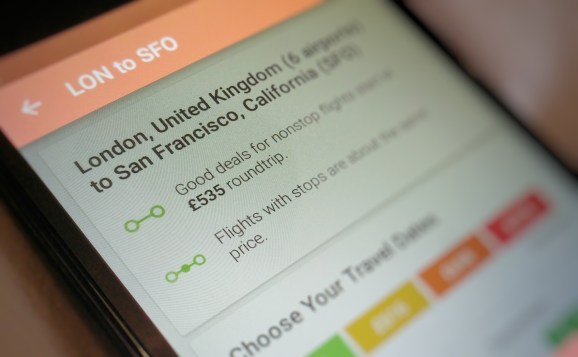 Hopper, an app for predicting airfare and booking flights, is now flush with cash: The 6-year-old Montreal- and Cambridge, Massachusetts-based company has raised a $61.2 million round led by Canadian fund CDPQ ($82M CAD).

“We are selling $1 million of air a day,” Hopper CEO Frederic Lalonde told VentureBeat in a phone interview. “We’re a full blown agency, not like Hipmunk, not like Kayak. Completely standalone.”

For every ticket Hopper sells, it takes a commission — the company won’t say how much. And Hopper also charges users a $5 fee per ticket. Lalonde says customers don’t mind the fee because “on average people save $50 a ticket.”

“Our main competitor is your laptop,” Lalonde added. He hopes Hopper, which is only available on mobile devices, will become the “largest and most used travel app in the world.”

That’s why Hopper raised $61.2 million (on top of the $38 million it’s already raised). Lalonde says Hopper will triple its staff to 120 people next year, and the company plans to set up a “local presence” in 120 countries in order to find and sell low fares outside the U.S. and Canada.