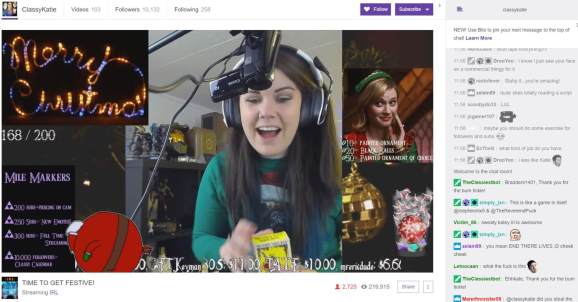 The IRL category enables streamers to talk about whatever they want without having to stop to play games.

Twitch is dropping some of its strictest rules to give its streamers more ways to interact with their viewers.

The Amazon-owned livestreaming service launched the IRL category today for broadcasters who just want to talk to the camera and their audience in chat without having to play a game (or painting a landscape or eating spicy chicken). Previously, Twitch moderators were rather strict about people who would go too long talking with their fans without creating “gaming content,” but the IRL category creates a space where people never have to do any gaming as long as they stay in the proper category. This definitely harkens back to the origins of Twitch as Justin.tv, which was a live “vloging” service. But Twitch marketing boss Matthew DiPietro explained that Twitch’s IRL streams and Justin.tv are fundamentally different because the latter focused on content while the former has taken a community-first approached.

“Since the beginning, the reason we launched Twitch is that we were letting the community to lead us where they were already going,” DiPietro explained during a chat with GamesBeat. “There was this passionate, organically growing group on Justin.tv that were doing this gameplay thing. So the main difference between how we are doing this at Twitch and how we did it at Justin.tv is that [the community-driven strategy] is still a guiding principle.”

Essentially, Justin.tv’s creators designed it to host all kinds of weird internet content. But when they designed Twitch, they built a platform designed for the community. And now, that community is asking to do vlogs without gaming.

“We’re amazed by our creators who build thriving communities and create compelling content for millions of viewers,” Twitch chief executive Emmett Shear said. “While gaming is their core identity, what we’ve heard repeatedly from them is that they are interested in sharing their everyday lives, thoughts, and opinions with their communities. IRL is designed to help our creators foster that kind of community interaction.”

This strategy of hyperfocusing on gaming and then slowly broadening to a wider audience is not unique to Twitch. Facebook is doing that with its Oculus VR company. Facebook CEO Mark Zuckerberg has said that VR could be the next major computing platform after smartphones, but the Oculus’s Rift headset is primarily a gaming machine at this point.

We’ve also seen the inverse of corporations that are already established in other markets trying to build gaming brands. Kingston, a creator of memory products for PCs, has built up its HyperX gaming-focused division for the last several years. HyperX continues to grow as Kingston finds that people who identify as gamers tend to spend a lot of money on gaming-themed hardware.

Twitch, however, is probably the best example of this strategy. It has built a huge, loyal community of over 2 million broadcasters and 100 million monthly viewers, and now — on top of that foundation — it is letting the interests and desires of that group guide its growth back into market segments it had previously retreated from.