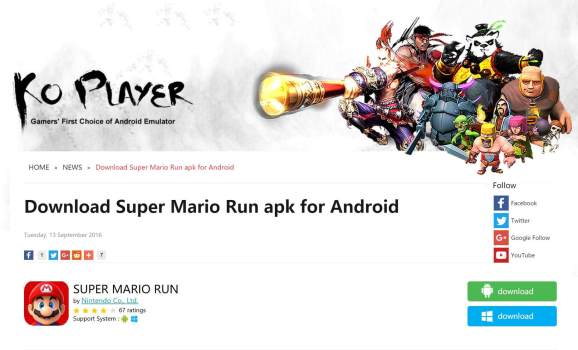 There is no Android APK for Super Mario Run.

Often before a new mobile game comes out, people who use an Android smartphone or tablet can get the game early by scouring the internet for Android install files known as APKs. These are like .exe files on Windows, and they enable you to install software on your device without having to go through the Google Play Store.

Naturally, with Nintendo launching Super Mario Run exclusively for iOS systems yesterday, Android owners are desperate to play the game. Since it’s not on Google Play, some folks are searching forums and APK databases for the Nintendo platformer. If you do this, what you will find instead are viruses and other malicious pieces of software attempting to look like Super Mario Run.

Super Mario Run, you see, doesn’t have an APK for Android yet.

Many shady websites, like KO Player, are already hosting files that they claim are an APK for Super Mario Run that will enable you to play the game on a Samsung Galaxy, an LG V20, or a Google Pixel. But the reality is that these are almost also viruses of some sort.

“As Nintendo’s second foray into mobile gaming with one of their lead franchises, Super Mario Run is immediately going to be a prime target for attackers trying to exploit its code – especially with the number of users which will be downloading this game,” app-security company Axran’s vice president of research, Aaron Lint, said in a note to GamesBeat. “Just as with the previous smash hit Pokémon Go, we anticipate the appearance of corrupted fake apps used to spread malware.”

Even when Nintendo does finally get around to launching Super Mario Run on Android, it’s risky to download it from a third-party website. Hackers could add extra code to what otherwise looks like the real game to compromise your data. Of course, despite that risk, many people will attempt to do that so they can pirate the game without paying.

Nintendo is using an online connection to prevent people from playing the game without authenticating first, but it’s likely that hackers will crack that.

“Pirates [are] setting to work enabling free versions of the full game, saving people from the $10 price tag,” said Lint.

So Android users are probably best off waiting for the official Google Play release. In the meantime, you could always use your imagination: