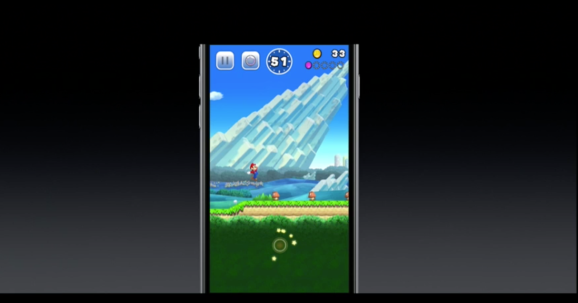 Nintendo has the biggest game on iOS right now.

Super Mario Run is No.1 on the iOS download and grossing charts in the United States, according to intelligence firm Sensor Tower. That’s abnormally high for a game without free-to-play microtransaction spending.

Mario is a free download, and one $10 purchase unlocks all of its content (read our review). This is the first Nintendo game to launch on mobile devices, and the publisher is still experimenting with the platform. But even without adopting the most popular and lucrative business model, it looks like Super Mario Run could generate a significant amount of revenue from the $36.6 billion mobile gaming industry.

Nintendo didn’t launch Super Mario Run only in the United States. The game is actually the top-downloaded app in 80 countries and the top-grossing in 30 countries.

“I expect that it will soon hit No. 1 on the top-grossing charts in more countries as users hit the monetization pinch point,” Sensor Tower head of mobile insights Randy Nelson explained in a note to GamesBeat.

Super Mario Run is a momentous release in the history of Nintendo. The publisher has traditionally held tightly to its characters and properties and kept them exclusively on its own gaming systems. Super Mario is synonymous with the NES, Super NES, and Nintendo 64 for a lot of people. But now, as the company is coming off the Wii U, which is widely regarded as a failure, it is in need of new sources of cash, and that led it to finally embrace mobile.

Mario is only the start of that strategy as the company has already revealed plans to launch mobile versions of its Animal Crossing and Fire Emblem franchises.