Twitter may have announced it’s shutting down Vine, but that’s not entirely true. On Friday, the company revealed that in January, it will launch a pared-down version that continues to let you to create six-second looping videos. Also, for those who fear the worst for their creations, Twitter now lets you download your videos through the Vine app and website.

In a blog post, the company said that it has been “working closely with creators to find out what’s important to [users], to answer [user] questions, and to make sure we do this the right way.”

Starting next year, the Vine you know in the App Store and Google Play is becoming Vine Camera. It still does the core function, letting you take 6.5 second looping videos (a half second longer!) while also being able to post or save them right to your phone. What you won’t be able to do is anything else, such as editing or applying music.

But before you get the latest app, make sure you download your Vines from the app. Once the pared-down version hits the marketplace, it will prevent you from doing so, although you can grab your files from the Vine website. When you download your files through the website, the company provides you with an index.html file that not only features the video, but also the captions, number of likes, comments, and revines. But if you do it through the app, only the Vine itself is saved, nothing else. 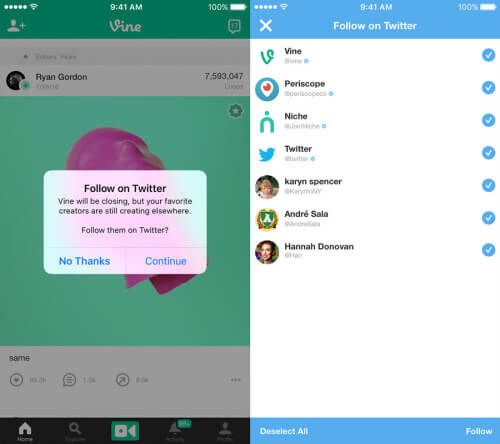 Soon, the company plans on rolling out a way to make it easier for users to follow creators on Twitter.

This respite of Vine’s demise is likely welcome news for creators, those stars who have made names for themselves with six-second videos. But then again, because it’s pared-down, it might not have given them exactly what they wanted because they can only create the looping video — they’ll have to find another way to do the post-processing work and then share it to Vine, Twitter, and other services.

Of course, this continues to open up opportunities for competitors such as Facebook and Instagram and others eager to entice creators over to their platform.

When acquired in 2012, Vine played a pivotal part in Twitter’s foray into video. Its service enabled people to create quick 6-second clips and spurred a growing number of creators a la YouTube stars. Since then, many features have been added, including web embed support and the release of Android, Kindle Fire, and Windows Phone apps (it previously was only on iOS); direct video messages were also added in 2014 before Vine made the service available on TV.

The one-time video darling of Twitter, Vine seemed to have promise until the addition of Periscope, which has become a major staple of the company’s push towards live and video content.