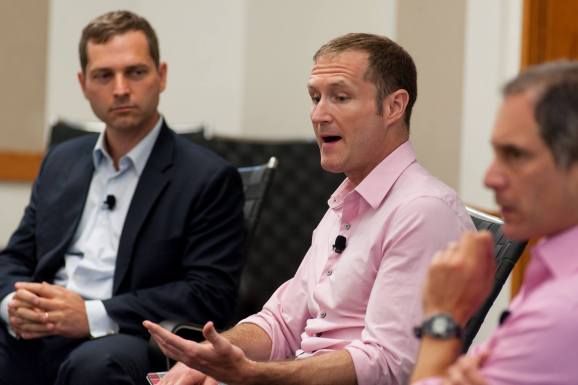 Gene Munster, the best known of all Wall Street analysts who follow Apple, wrote his 874th and final research note on the company Thursday night, predicting more big things from the tech giant.

Apple was a much smaller company over 12 years ago when Munster wrote his first note, The Apple Option—Predicting Another Revolution, urging investors to buy the stock. Adjusted for later stock splits, the price was under $2 a share (it’s now at almost $116). No one outside of Apple had an inkling about the iPhone, but the iPod was just taking off.

“Apple’s early success with the iPod will be a catalyst for transformation to an Apple with a core focus on the ways in which the market for peripheral devices can be expanded,” Munster wrote as he began to cover the company for Minneapolis brokerage firm Piper Jaffray.

Given that the shares steadily rose more than 50-fold to a 2012 peak, it was one the great calls in the history of the stock market. As Munster had predicted, computers became less and less important as Apple rode the wave of the iPod and then the iPhone to record profits.

Munster occasionally went off track, such as with his 2012 prediction that Apple would become the first company with a $1 trillion market cap (it’s at $622 billion today) or his misguided obsession that the company would sell a TV set. But he remained one of the most reliable financial analysts over his career. Bloomberg ranked the accuracy of his forecasts 11th out of the 58 analysts who covered the company over the past year.

In a final note before starting a new tech investing firm of their own, Munster and his partner Doug Clinton assessed Apple’s efforts to convince investors that it should be more highly valued due to its recurring revenues from services like iTunes music and iCloud online storage.

“Since I started covering Apple in 2004, the two core concerns from investors have always been unit growth and innovation,” Munster wrote. “Not much has changed since 2004 despite the evolution of the business from PC to mobile and not much will change if they are not successful in making Services a bigger part of the story.”

Still seen as a hardware vendor, and one in the often fickle and faddish mobile phone business, Apple’s stock price trades at only 14 times its profits per share. Tech companies seen as primarily selling software and services are more highly valued per dollar of profit. Google trades at a P/E ratio of 29, Microsoft at 30, and Salesforce at 238.

To reach critical mass in investors’ view, revenue just from services would need to be at least 30% to 50% of Apple’s overall revenue, up from just 13% of overall revenue last quarter. That may require radical new strategies, like selling much cheaper hardware or including services and devices in one bundled price, Munster mused.

“We don’t know what the right answer is, but feel confident the management team will figure out the best forward path to optimize the Services story,” he wrote.

As he prepared for a new life in venture capital this week, Munster’s ultimate take was still optimistic, however. “The company can recreate that magical feeling with some future product and will enjoy watching the stock rise when they do,” he wrote. And for the record, he still rated the shares “outperform” with a price target of $155.