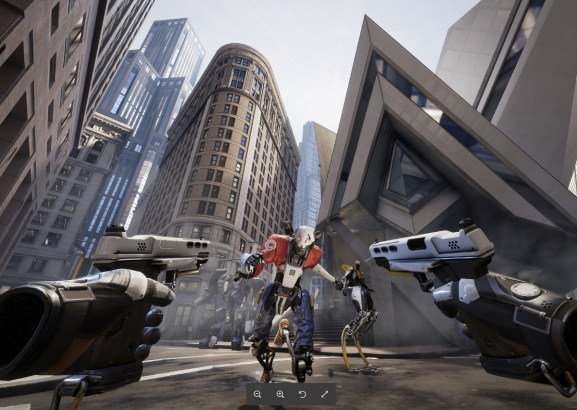 Oculus is one of the most prolific stimulators of virtual reality content in the industry today. The Facebook-owned company has been funding VR games and projects for years now through Oculus Studios. In October, Facebook CEO Mark Zuckerberg finally put some numbers onto these ongoing efforts when he revealed that his company had spent $250 million on VR content with a plan to spend at least that much over again in the coming years. These are impressive numbers but it has still never been clear how much Oculus and Facebook are spending on each individual project. Tim Sweeney of Epic Games, however, is clearing some of that mystery up in his typical, outspoken fashion.

During an interview with the programming icon at last week’s VRX conference in San Francisco, Sweeney spoke briefly concerning Epic’s upcoming VR title Robo Recall and the unique nature of its development as an Oculus-funded, Rift exclusive experience.

“In 2006, a world class Triple A game cost 10-20 million to produce now they’ll cost up to 100 million. It’s become so expensive and so risky that only massive publishers can really afford to put these kinds of games out,” Sweeney said. “Oculus has been willing to fund third party software that’s exclusive to their hardware. That’s a perfectly acceptable way to jump start an industry…For example, Oculus is funding Robo Recall which has a budget that’s close to the budget of the entire first Gears of War game.”

Gears of War is the first entry in what has become a massively successful, exclusive franchise for Micrsofot’s Xbox video game console. The game released in 2007 and that same year an interview with Epic vice president Mark Rein was published by Wired. In that interview Rein states clearly that the budget for Gears 1 was “somewhere between nine and ten million dollars.”

Connecting these dots gives us our best look yet at the types of investments Oculus is making in individual VR content. The fact that Oculus is out there making plays in that range is a hugely important thing for early-stage creators. Game development is risky and without this sort of financing from Oculus Studios, or the newly minted Vive Studios, there would be far fewer reasons to consider getting a headset.