There’s a popular trend among brands these days, one that involves setting up an office near densely technological parts of a city. These so-called innovation centers have become outposts from which companies can observe emerging products and technologies to better adapt to the changing business landscape.

One popular hub happens to be Silicon Valley — it’s where those with a keen eye are likely well-positioned to predict shifts and trends, better understanding the implications of Facebook buying WhatsApp, Microsoft purchasing LinkedIn, or Google snatching up YouTube.

Although Silicon Valley is considered perhaps the most popular place for innovation, it’s slowly ceding ground to tech hubs outside of the U.S., namely in Asia. According to a new report from Capgemini and Altimeter Group, not only are companies creating more of these centers to be better aligned with local startups, investors, academia, and other communities — there are now more than 456 such centers globally, as of October 2016, a 51 percent increase from July 2015 — and they’re being established in areas such as India, London, Singapore, Paris, Bangalore, Tel Aviv, Toronto, and Shanghai. 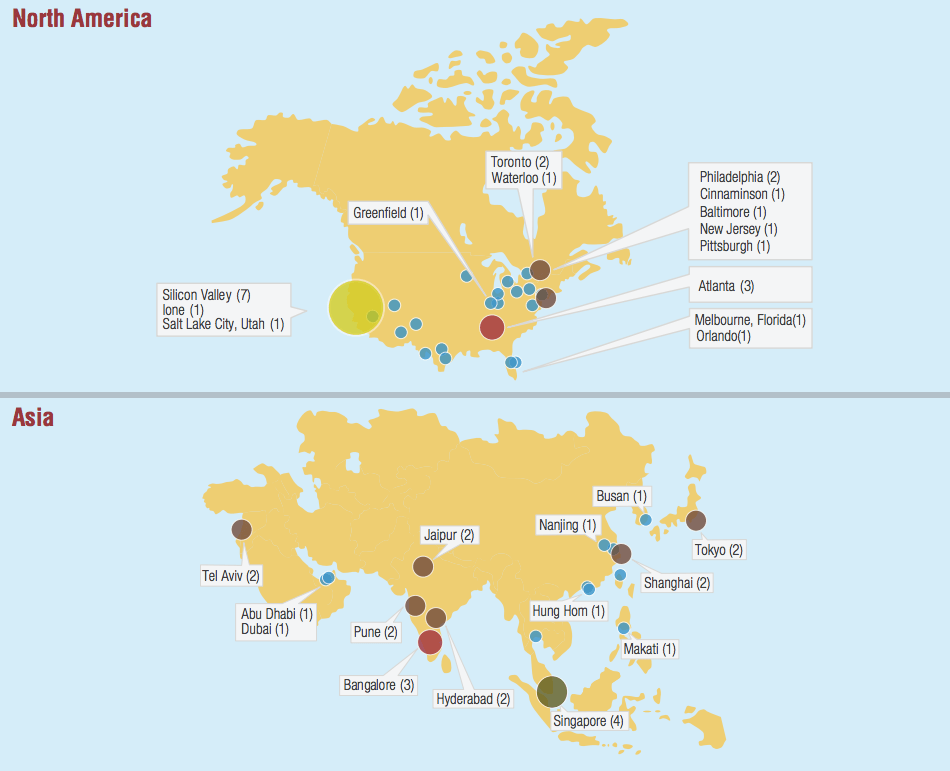 Above: Where innovation centers have opened in North America versus Asia.

The report is the third in a series by author Brian Solis on how legacy companies are combating the rise of impactful startups and legitimately disrupting the status quo. But while we may think of Silicon Valley as the birthplace of Facebook, Twitter, Google, Yahoo, Airbnb, Pinterest, Intel, Sun Microsystems, and Apple, it seems there’s more beyond this proverbial bubble. And it appears that companies are recognizing this too and realizing that they no longer have to just establish a presence in the San Francisco Bay Area.

“Between July 2015 and October 2016, [Silicon Valley’s] share in the world’s total innovation centers has fallen from 18 percent to 14 percent,” Solis wrote in the report. “This is a result of increasing competition from a diverse set of hubs across the world. In particular…the top three cities in Asia — Singapore, Bangalore, and Tokyo — together added more innovation centers (9) between March and October 2016 than…Silicon Valley.”

The reason behind the abandonment of Silicon Valley, and even Europe, is due to the supply of talent in Asia. Based on Solis’ research, 29 percent of all innovation centers are now located in the region. He cites the example of Canada-based insurance company Manulife, which opened its LOFT innovation center in Singapore, spurred by the startup culture in the country. 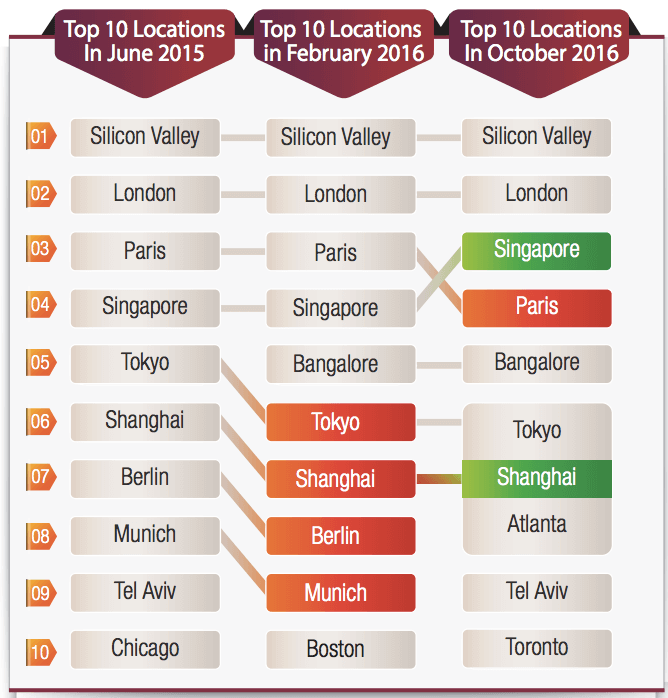 “Consumers in Asia are looking for tools and services to make their lives easier. There are tremendous rewards on offer for those businesses that take up the challenge. That’s why we chose to build a LOFT in Asia and Singapore, with its thriving start-up [sic] culture, is the perfect home for that investment,” explained Manulife Asia’s president and chief executive Roy Gori.

But these companies aren’t setting up shop around the world just for the sake of trying to be “innovative.” They’re focusing on specific technological areas, with many expressing interest in big data and analytics. Rounding out the top 5, companies preferred sectors that include the Internet of Things (IoT), cloud and software, manufacturing technology and robotics, and financial technology. 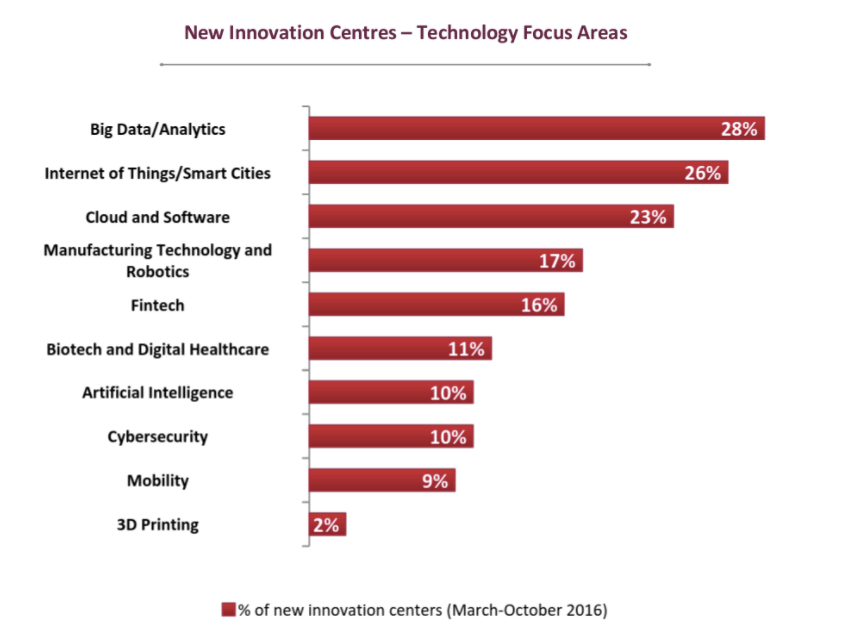 Artificial intelligence and cybersecurity fall within the top 10 focus areas for innovation centers, but it’s possible that with continued interest in these spaces — based on security breaches and other recent events — companies may eventually shift more of their focus toward these areas.

Interestingly, the general focus has already shifted greatly from nearly 1.5 years ago, when mobility was an area of primary interest, and big data and IoT followed along. Now mobility is a much smaller percentage of the focus.

“Innovation centers are corporate attempts at thwarting digital disruption. And companies seeking to outmaneuver disruption usually become the disruptors in their space,” Solis remarked. “With Asia’s dominance in this edition of our research, it’s clear that innovation is becoming globally democratized. Furthermore, by tracking associated technology trends, the focus on AI suggests that the future of corporate innovation will realize new business models, products, and processes emanating out of Asia with global effects.” 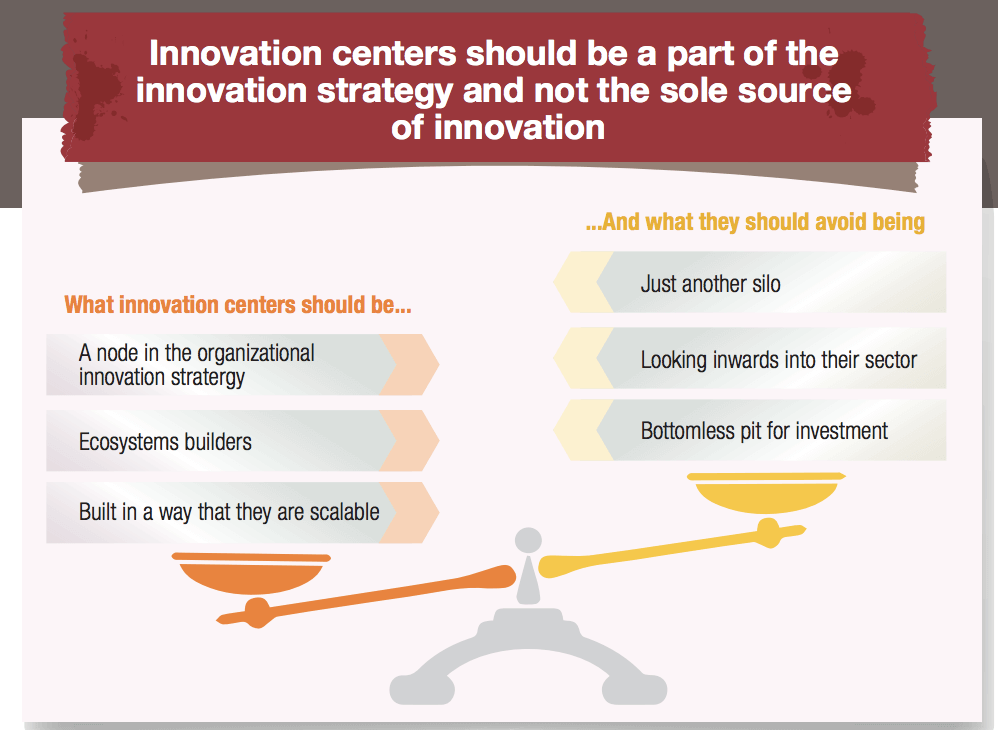 And while this report suggests a changing pattern in terms of where innovation centers are being established, before jumping on the bandwagon, companies need to make sure they are moving with the right intentions. Solis’ research indicates that brands need to consider their goals in setting up innovation centers — is it to solve a genuine problem or to explore new opportunities in order to help scale the business? They also need to understand the metrics for success, make sure that people are aware of their presence, and integrate with the local ecosystem.

It’s more than just research and development. It’s about working to discover something new, impacted both by the people in the surrounding area and those inside the office. “It’s important to foster intrapraneurship to attract the best, most capable talent and expertise to drive innovation,” the report reads. After all, innovation centers aren’t about shifting existing employees around — the idea is to bring in outside talent to provide new ideas, and perhaps even help steer the company’s direction.

Companies also have to gear their ideas toward something of value, ensuring that “they understand how the idea will meet immediate customer demands that align with business impact,” as well as focusing on long-term goals.

Lastly, partnerships are key, especially in these tech ecosystems. Everyone has to be on the same page.

Innovations centers aren’t a fad, as this report shows. Companies know they must find ways to adapt or die. And for those that can’t buy their way in, the next step is to evaluate what new age competitors are doing and find ways to move with the next wave. And they can never stop looking at not only where technology is going but where the talent is. As Capgemini and Altimeter seem to prove, interest and resources are already shifting to places many never imagined as hotbeds of innovation.