This year’s bitter presidential election has caused a rift in online relationships. According to a new survey, 13% of Americans reported blocking or unfriending a “friend” on social media because of their political postings

But the results of the study, carried out by the non-partisan Public Religion Research Institute, show the impulse to block varies widely based on gender and political leanings.

The study shows Democrats were almost three times more likely than Republicans (24% vs. 9%) to have unfriended someone after the election. A similar disparity turned up for self-identified liberals versus conservatives (28% vs. 8%). Meanwhile, only 9% of independents reportedly booted someone out of their online social circles because of politics. 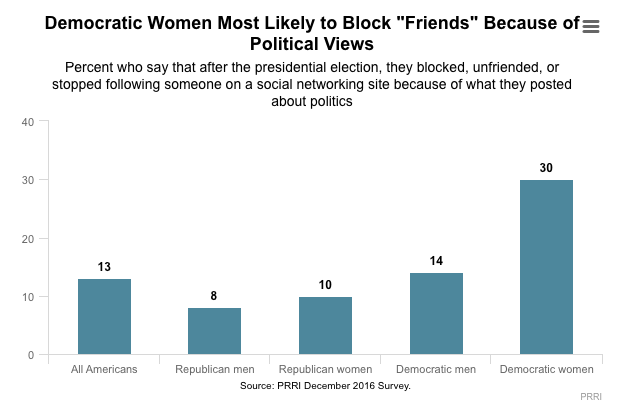 As this graphic shows, the survey also identified “Democratic women” as the most likely of all groups to block someone on social media:

The survey did not ask questions about cutting online ties to others on specific websites such as Facebook or Twitter. The results show 4% of respondents said they did not belong to any social network.

There are a number of possible explanations for the different rates at which various groups unfriended others over politics.

One is that Democrats may be feeling despondent about the election, and are thus more inclined to block stories about Donald Trump or victorious conservatives. Another is that liberals and women may be more frequent targets of online trolls, leading them to block more often.

Whatever the reason, the overall results do point to a larger and troubling trend in online media: The growth of “filter bubbles” in which people live in ideological cocoons that shut out discordant viewpoints. Some fear the existence of filter bubbles increase political partisanship as voters become less exposed to those who don’t share their opinions.

The study, which also included question about Christmas and family politics, was conducted by surveying 1,004 people by phone.