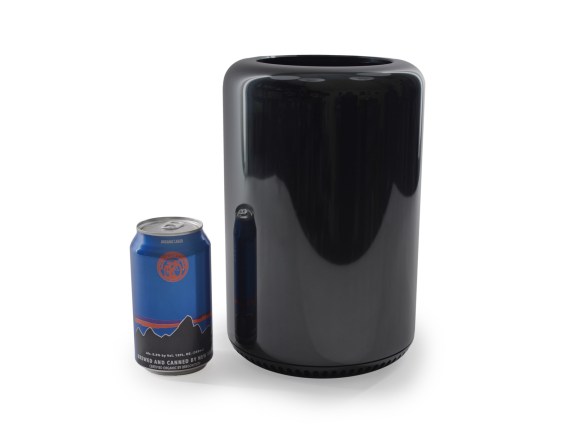 The Mac Pro next to an aluminum beverage can.

Apple chief executive Tim Cook today addressed concerns about the state of Mac desktop hardware inside the company, following the release earlier this year of a refreshed MacBook Pro but no new Mac desktops.

Cook’s message is clear: Apple does not intend to stop making desktop computers, despite how things might look from outside Cupertino.

In a post on a message board for Apple employees that was originally obtained by TechCrunch, Cook wrote:

The desktop is very strategic for us. It’s unique compared to the notebook because you can pack a lot more performance in a desktop — the largest screens, the most memory and storage, a greater variety of I/O, and fastest performance. So there are many different reasons why desktops are really important, and in some cases critical, to people.

Some folks in the media have raised the question about whether we’re committed to desktops. If there’s any doubt about that with our teams, let me be very clear: we have great desktops in our roadmap. Nobody should worry about that.

That Cook neglected to call out the Mac Pro or the Mac Mini by name in today’s message is indeed telling; it could be read as an indication that Apple does not intend to revamp one or even both. The Mac Pro was last updated in 2013 and the Mac Mini in 2014.

Reading between the lines: the Mac Pro is very likely dead. To Tim Cook, the iMac is the desktop, period. https://t.co/yaVj0aPvrn pic.twitter.com/gWNDlY2tgL

Arment, previously Tumblr’s lead developer and the creator of Instapaper, knows the Mac Pro well, having bought them in the past. In a blog post last month he pleaded, “Keep the Mac Pro alive, Apple, so none of us have to make that choice,” in a reference to switching off of macOS.

In October, Microsoft unveiled a Surface Studio all-in-one computer that has received positive feedback. Apple, for its part, in June confirmed that it would be retiring its Thunderbolt Display, opting instead to promote new Mac-friendly LG displays.

As for new Mac desktops, at least it’s now a question of when, not if. For certain power users, they can’t arrive soon enough.

“These future Macs may be great, but a lot of people are tired of waiting,” as Relay FM cofounder Stephen Hackett put it.