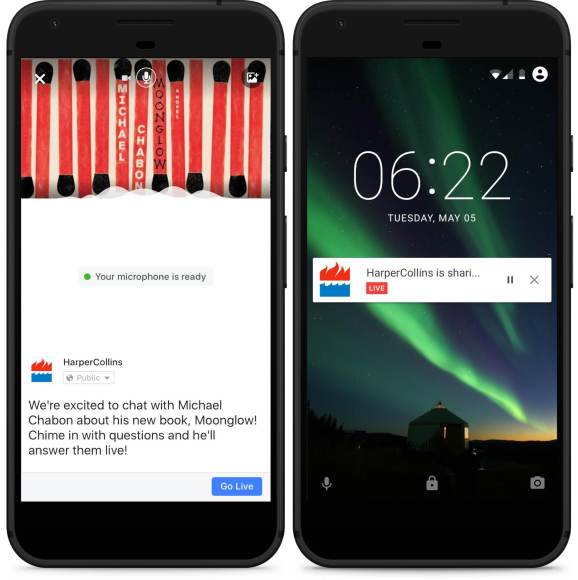 Facebook has been heavily promoting the fact that it wants you to go live, but some people just aren’t comfortable showing their face in front of the camera. That’s why the social networking company has launched an audio-only mode that will allow content creators to find the right setting for them. Called Live Audio, it’s an opportunity for broadcasters such as those on the radio, podcasters, and those who prefer the sound of their voice versus a more visual medium to share their opinions with the world.

Publishers such as BBC World Service, LBC, and HarperCollins, along with authors like Adam Grant and Brit Bennett, have already signed up to test out Live Audio. Facebook said that there are plans to extend this offering to more people starting next year.

“We know that sometimes publishers want to tell a story on Facebook with words and not video. We’ve even seen some Pages find creative ways to go live and reach audiences with audio only by using the Facebook Live API or by adding a still image to accompany their audio broadcast,” explained product specialist Shirley Ip and software engineer Bhavana Radhakrishnan in a blog post. “Our new Live Audio option makes it easy to go live with audio only when that’s the broadcaster’s preferred format.”

Facebook Live Audio is available on both iOS and Android, but with a bit of a twist. If you’re on the former, you’ll be able to continue listening to audio broadcasts while browsing other parts of Facebook, but if you leave the app, the stream will be terminated. Should you have the latter, the audio will continue playing even after you’ve left Facebook or even locked your phone.

The company envisions that interviews, book readings, new songs, and many other audio-centric use cases will benefit from this, and the need for video will no longer be a hindrance to people who want to share things with the world live. Of course there’s another benefit: If you start a live video broadcast and internet connectivity drops, you can switch to audio so that the stream never stops.

How much this will affect the likes of SoundCloud, iTunes, and others remains to be seen, but featuring this content on Facebook Pages along with videos and other media could invigorate a fan base. Of course, it may just wind up being a preferential thing for users; some may prefer iTunes since they can download the audio.