Viber is unveiling a handful of new features as the company looks to bolster its arsenal in the battle with other mobile messaging apps. 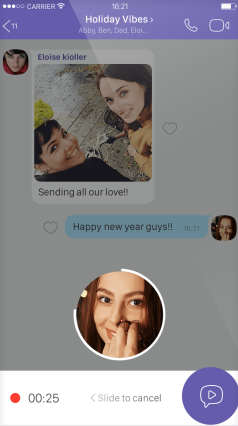 The first notable new feature is instant video messages, which lets users send little video clips of up to 30 seconds in length. Users hold down the video message button inside the chat window, pretty much like the existing voice-messaging feature. The voice- and video-messaging button are actually one and the same, and you can toggle between the two options by swiping on the button.

Additionally, VIber is also launching integrations with third-party services, letting users search for content hosted elsewhere directly from within the Viber app. Kicking off initially with support for three services, users hit the little @ symbol within a message and choose one of the extensions to access a ton of animated GIFs from Giphy, while they can also send preview links for Wikipedia and TheMovieDB articles. These so-called “chat extensions” will be expanded to include more services in the future.

Founded in 2010, Viber claims more than 800 million users globally across desktop, Android, Windows Phone, and iOS. Like other messaging apps, such as WhatsApp, it offers group or individual chats, as well as voice- and video-calling functionality. VIber was acquired by Japanese ecommerce titan Rakuten in 2014 for $900 million.

The new features will be made available on Android and iOS shortly.