A holiday comic revealed a big surprise for Overwatch fans.

Blizzard has released a new digital comic for its team-based shooter, which has quickly become one of the most popular games in the industry since it launched in May for PlayStation 4, Xbox One, and PC. Normally, a digital comic wouldn’t be newsworthy. However, this story shows Tracer, the game’s cover star, rushing to buy a present for and later kissing a girlfriend. 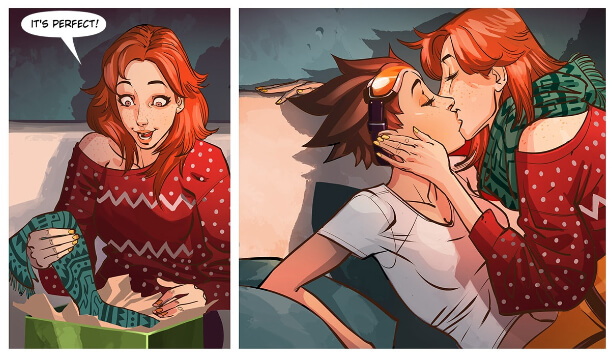 Video games offer few heroes for the LGBTQ community to look up to, but this revelation raises Tracer up as one of the most prominent queer characters in the industry. Even when a LGBTQ person appears in a game, they’re often a side-character or a role-playing game hero who has options for bisexual encounters — and these are often designed to appeal to men’s sexual tastes even if they’re including queer characters. Tracer, however, is Overwatch’s most visible hero, adorning the game’s box by herself and showing up frequently in promotional materials.

Blizzard actually said that Overwatch would have a gay character back in 2015, but it didn’t specify who it would be. However, Blizzard also noted that the cast would have more than one queer character, so Tracer won’t be Overwatch’s only LGBTQ star.