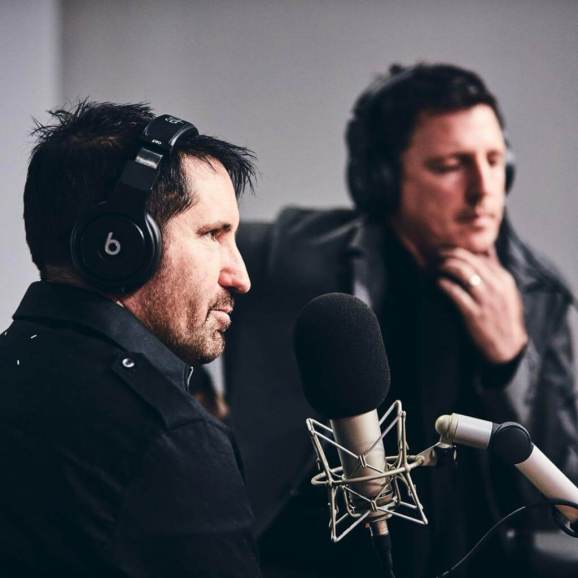 The conversation is wide-ranging and worth listening to for fans of the band. But it’s also fascinating for those who follow Apple. Reznor has contributed to Apple Music since its 2014 acquisition of Beats Music, and he is arguably one of the company’s most prominent assets in the music world. Yet Reznor didn’t give Apple an exclusive on the band’s new release. What Apple got instead is a big interview, which the company understandably hyped on social media.

This arrangement stands out from Apple’s typical approach to music these days. As Apple Music executive Larry Jackson said in an interview with the New York Times, the release of exclusive music is “still consistently a very powerful messaging tool, just marketing for the concept of streaming.” Competing services, including Tidal, have also promoted exclusive releases, but at Apple Music, they have practically become a feature.

Reznor, though, has never been one to fit in. In the interview, he talked about how he “resisted iPods” in their early days, even though he’s an Apple employee and was making an appearance on an Apple media platform. And even though Apple offers instant access to tens of millions of songs on Apple Music for a monthly fee, Reznor said he prefers to listen to vinyl records the whole way through.

Reznor also discussed what he’s tried to do in his contribution to Apple Music.

You know, I’ve always been intrigued by technology. I resisted iPods when they first came out. You know, I didn’t feel like that was how I wanted to listen to music at the time. A couple of lines of Chicago font, you know, with a white background. But taking one on tour and realizing that I’ve got several thousand albums at my disposal changed the way I listened to music. You know, now I could take all of Frank Zappa’s catalogue with me instead of those Case Logic CD boxes, you know, lugging them onto planes and buses. And seeing that stereos changed from what they were in my day to the computers in dorm rooms and realizing that physical media is dead, or will be dead. Okay, interesting, interesting.

Watching what’s happening over the last few years with streaming services and clearly understanding that’s what’s going to happen, and access — everyone will have access to everything. Sadly watching the devaluation of music in the process.

And I’m not saying that as a greedy musician but just — not just monetarily, but music is something now you do in the background, while you’re checking your email, while you’re distracted by the other barrage of stimulation coming out of your phone or whatever screen you’re in front of.

I’ve tried my best with Apple to help elevate Apple Music into being something that retains some of the great qualities of walking into a cool independent music shop, you know, where you feel that music is respected and presented with love. And it’s not just an FTP server, you know.

This record, we kind of feel like we’re offering it for sale, it’ll be on streaming services, it’s not exclusive anywhere. But if you want it from us, we’re selling it as a piece of vinyl that feels like something we want you to have. I enjoy having a — it’s an experiential thing, you know, you have to touch it, you have to figure out where to put it, you know, you see it when you walk past it. It exists in the physical world.

And we have something that, if you buy it digitally from us, we’re also going to ship something to you. That’s the experience.

I don’t expect any or many people to follow that path, but as the artist, that’s the premium experience to me. And I expect that to be eyerolled, and that’s totally fine, you know, but I’ve begun listening to a lot more vinyl lately, because I like not being able to skip songs.

It’s something that, you know, I turned out the way I did, and the music I loved, the music that’s shaped who I am as an artist, is because I had to — I listened to it that way. I only had a few albums that I could afford, and frankly, I didn’t like some of them. You know, I didn’t like the Talking Heads’ Remain in Light when I got it. I couldn’t understand it. It scared me, you know? But I only had 30 albums, and that’s the one I invested in that month, and I listened to it. You know, and on the third listen, it started to make sense to me. You know, and on the 10th listen, I enjoyed it. You know, and on the 50th listen, it made me smarter, you know, and it changed my viewpoint. And I don’t think — when you have access to everything, that it’s so easy to say no, no, no, no, skip, skip, skip — you know, you live with that stuff.

You know I’m not lamenting old technology. I’m just saying that the byproduct as I see it is the role of music as an important art form has suffered a bit.