Uber has begun implementing plans for where it will test out its self-driving cars. The company revealed that it has selected Arizona as the next state where the autonomous vehicles will be put through the wringer, and riders should begin seeing them on the roads sometime early next year.

In a statement, a company spokesperson said: “Our cars departed for Arizona this morning by truck. We’ll be expanding our self-driving pilot there in the next few weeks, and we’re excited to have the support of Governor [Doug] Ducey.”

For a while, Uber had been operating a pilot program in Pittsburgh, but this month expanded its testing into San Francisco. But hours after launching in the City by the Bay, California’s Department of Motor Vehicles (DMV) expressed outrage and ordered the company to obtain the necessary permits. Naturally Uber fought back, arguing that what it was doing didn’t fall within the state’s regulations. Ultimately, the company acquiesced and terminated operations, but said it was still committed to doing work in the state.

When Arizona was in play is unknown, but soon after Uber’s decision, Governor Ducey invited the company to bring its technology to his state, saying that what California did was an example of overregulation.

Arizona isn’t exactly new to autonomous vehicles, as its roads are the testing grounds for companies like Google and GM. The growing number of these cars may contribute to the growth of a tech industry in not only cities like Chandler and Phoenix, but statewide.

What support Arizona’s governor is providing remains unclear, and we’ve posed the question to Uber as well as which city will see the self-driving cars on the road in the next few weeks. Under Ducey’s leadership, the state has formed a committee regarding self-driving cars, made up of transportation, public safety, and policy experts that work with the state in researching this technology.

“As technology advances, our policies and priorities must adapt to ensure we remain competitive in today’s economy,” Governor Ducey once said. “It’s in Arizona’s best interest to embrace new technologies and encourage innovation. In this case, it means new jobs, new research opportunities for our universities, increased transportation options for Arizonans and a number of social and public safety benefits that will improve the way we live and get around. These efforts reflect and will reinforce our mission to make Arizona the best state in the country to bring 21st-century jobs.”

The so-called self-driving cars oversight committee was established earlier this year in order to “get ahead of the technology”; Arizona wants to have a role in determining how it should be implemented.

“What we like to say is that the technology, or at least the implementation, is going to be evolutionary rather than revolutionary,” Arizona Department of Transportation deputy director for policy Kevin Biesty told KJZZ in March. “The states and localities have to be at the table because we have to be part of the discussion about what kind of infrastructure these vehicles are going to need, what kind of technologies we’re going to need to implement within the roadways.”

In a statement today, Governor Ducey explained his decision: “Arizona welcomes Uber self-driving cars with open arms and wide open roads. While California puts the brakes on innovation and change with more bureaucracy and more regulation, Arizona is paving the way for new technology and new businesses. In 2015, I signed an executive order supporting the testing and operation of self-driving cars in Arizona with an emphasis on innovation, economic growth, and most importantly, public safety. This is about economic development, but it’s also about changing the way we live and work. Arizona is proud to be open for business. California may not want you, but we do.”

On Thursday, the on-demand ride service distributed photos showing its XC90 cars packed up on an Otto truck (self-driving too!) on their way to Arizona. 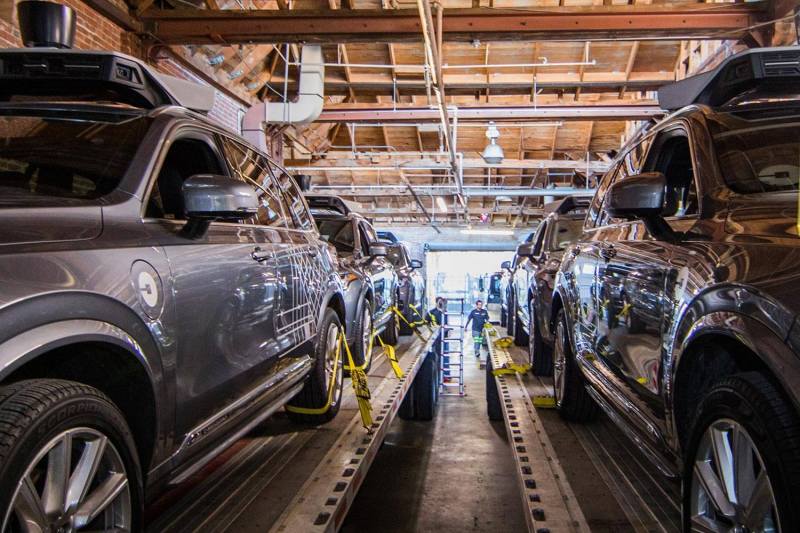 To be honest, it’s kind of interesting to see California shun this innovation, albeit one that has some serious flaws and is prone to endangering bicyclists and running red lights. Instead of finding traditional support from the heart of the tech industry, Uber has seen fit to flee to the waiting arms of Arizona.

We’ll update this post if we hear back from Uber. We’ve also reached out to the Arizona Department of Transportation to inquire about whether the company will have to obtain permits, like it was required to do in California. Should we hear back, this post will be updated.

Updated as of 1:31 p.m. Pacific on Thursday: The Arizona Department of Transportation just issued this statement:

We hope this cooperation and common-sense approach, combined with this state’s favorable climate, encourage even more companies to test autonomous vehicles in Arizona.